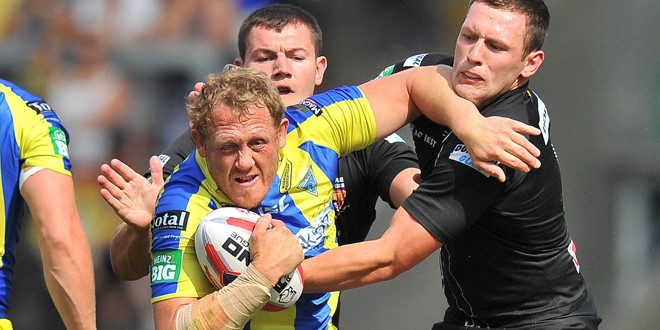 In a nutshell
Huddersfield threw away an early lead and conceded three tries in the last 10 minutes to surrender the points to a Warrington Wolves side that may have found its attacking flair.

How it unfolded
8′ – The home side draw first blood just moments after Joel Monaghan is tackled just short of the Giants line, a superb inside ball from Jason Chan sending Scott Grix over for a try that Danny Brough converts: 6-0.

33′ – Rhys Evans breaks through down the left side as space opens up to bring the Wolves back within a score, Stefan Ratchford misses the conversion: 8-4.

36′ – The Giants hit back in style after a fantastic Brough break puts in Jodie Broughton under the sticks. Brough adds the extras: 14-4.

45′ – Wolves shift the ball across the line in thrilling style from right to left and Richie Myler finds a gap, which he fully exploits. Ratchford converts: 14-10.

74′ – Gene Ormsby completes the from-behind victory with a well-taken score down the left. Bridge converts: 14-27.