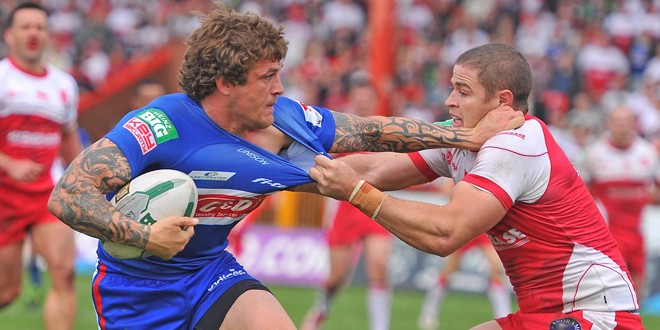 In a nutshell
Hull KR totally outclassed Wakefield with a clinical and efficient performance in which they scored eight tries.

14′ – Rovers looking clinical and score again thanks to quick hands down the left flank, Kris Welham assisting Omari Caro who goes over in the corner. Burns fails to turn four into six: 10-0.

30′ – Consecutive sets thanks to a scrappy penalty gives the Robins yet another scoring opportunity, which they take with both hands – Josh Hodgson leaps over from dummy half. Burns converts: 16-0.

38′ – Paul Sykes, operating at full-back despite being named stand-off on the starting line-up, fumbles a Kris Keating grubber, which allows namesake Welham to score the simplest of tries. Burns adds the extras: 22-0.

51′ – Robins are in again and it’s that man Caro once more. The pacey winger makes a break, sells Sykes a dummy, then dives over in the corner. Burns misses conversion: 26-0.

58′ – A minute later, Keating steps his way past the tiring Wildcats defence to score under the sticks, and Burns adds another two points: 32-0.

61′ – Keating plays an integral part in the next score, too, utilising his quick feet to send Hodgson over for his second try of the game. Burns lands the kick: 38-0.

75′ – Pita Godinet salvages some Wakefield pride with an interception 30 metres from the line, though it is mere consolation. Jarrod Sammut converts: 44-6.