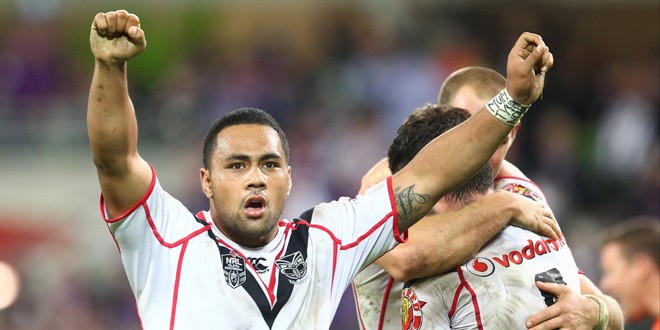 In a nutshell
Shaun Johnson starred as New Zealand Warriors got back to winning ways against a strong Melbourne Storm outfit. The Anzac Day crowd of 28,716 was the biggest ever to assemble at AAMI Park.

How it unfolded
It is more than fair to say the scoreline reflects the encounter, as the Warriors were classy throughout.
Indeed, the visitors opened the scoring in the eighth minute through David Fusitua, who latched onto a Shaun Johnson pass and scored the game’s first try. After 30 minutes, New Zealand had over 60 per cent of possession and were dominating territory. Just before the half-hour mark, Simon Mannering played in Feleti Mateo to cross under the posts.
As half-time approached, Cooper Cronk found Kevin Proctor for Storm’s first points, but Shaun Johnson landed a penalty to make it 6-12 at the break.
Just four minutes into the second half, Storm were over again through Young Tonumaipea, who got Melbourne within two. Many thought the Warriors would crumble under the pressure, but Johnson produced a moment of magic and showcased his famous step to terrorise the left side of Storm’s defence and put the match out of the home side’s reach.