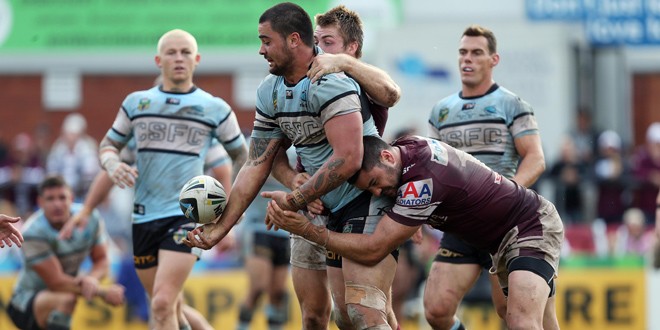 In a nutshell
The Sea Eagles built up a 20-0 half-time lead, and coasted to victory in the second half, while easily blunting the threat from Cronulla.

How it unfolded
The Sea Eagles took the lead in the first minutes, when a break by Jorge Taufua was supported by Steve Matai, who went over for a try converted by Jamie Lyon.

And the Sea Eagles scored three further tries in the first half from Brenton Lawrence, Taufua and Matai scoring his second, only the first of which was converted by Lyon.

On 56 minutes Peta Hiku extended Manly’s lead to 24 points, and the Sharks would have to wait until the 80th minute for a consolation try from Wade Graham.

A full review and match facts from all the weekend’s NRL games will feature in Monday’s Rugby League Express, available in the shops and online from 11.00pm on Sunday night UK time.