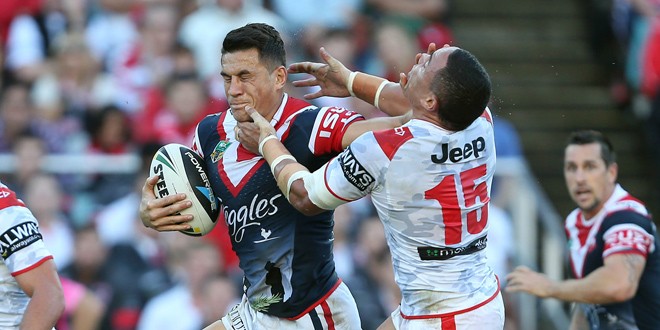 How it unfolded
10’ – Sydney’s Aiden Guerra opens the scoring after stepping inside and taking two defenders over the line with him. James Maloney adds the extras: 0-6.

17’ – Daniel Tupou extends the Roosters’ lead in stunning fashion, with commentators calling it the team try of the year thanks to a passage of play that saw them score from 70 metres out and move the ball to both wings. Maloney is again successful with the conversion: 0-12.

26’ – Ben Creagh gets one back for St George after finding space down the left courtesy of an offload, but Widdop can’t convert: 4-12.

36’ – Italy and Australia star Anthony Minichiello puts Sydney two converted tries ahead thanks to a long cut-out ball from Maloney, who lands the extras to put them three scores clear: 4-18.

40’ – With just seconds to go before half-time, Dragons centre Nathan Green gets a vital four-pointer to keep St George in the tie. Minichiello, normally safe as houses at the back, misses the ball when trying to clean up. Again, the conversion was not added.

43’ – Roosters hooker Jake Friend gets the second half off to the best possible start for the visitors with a try after chasing down his own grubber. Maloney converts: 8-24.

62’ – St George centre Gerard Beale gets the Dragons within 12 again thanks to a Gareth Widdop long ball. The Englishman then finally lands a goal: 14-24.

69’ – Roosters back-rower Boyd Cordner looks to have ended all St George hopes with a try. Maloney adds the extras to put 16 points between the sides: 14-30.

75’ – Shaun Kenny-Dowell adds insult to injury with a late try that came from sheer strength as he forced his way over despite the attention of three defenders. It was not converted: 14-34.