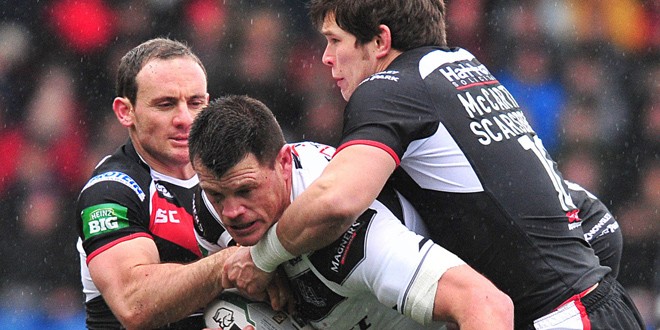 In a nutshell
The Vikings shocked their near neighbours with their first home win against Saints in the Super League era, scoring six tries and knocking Saints off the top of the Super League table.

How it unfolded
The Vikings led by 18-16 at the interval after a thrilling half of rugby.

They scored tries from Hanbury, Isa and Gerrard, with Tickle converting all three.

St Helens had scored first-half tries from Soliola, Masoe and Wellens, the last two, both of which were converted by Makinson, coming in the last five minutes of the half, leading their supporters to hope that their momentum would continue into the second.

But instead the Vikings took a grip on the match, scoring further tries through Hanbury, Flynn, Dean and Leuluai, with Tickle converting the first three.

Saints could never get back on level terms, even though they scored second-half tries from Makinson and Hohaia, with Makinson converting the second.

After a disappointing Easter, with two defeats, Saints have now fallen from first to third in the Super League table, behind Leeds and Castleford, while the Vikings have moved ahead of their Good Friday conquerors Warrington into fifth place.