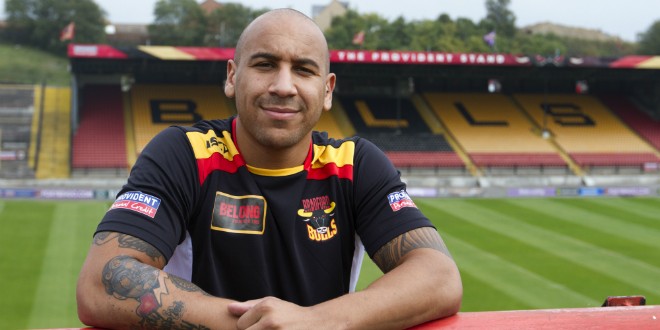 Bradford Bulls have revealed that utility star Matty Blythe is the twentieth addition to James Lowes’ ever-growing squad for next season.

Blythe, 25, has today put pen to paper on a new two-year deal with the club, meaning he will be a Bull until at least the end of 2016.

The versatile back or forward has featured on the wing, at centre, full-back, second row and loose forward this year, making 16 appearances.

The Irlam-born talent says he is delighted to have extended his stay at the Provident Stadium, insisting he is excited by the potential of the Bulls’ 2015 campaign in the Kingstone Press Championship.

“I am over the moon to be staying and, in truth, wanted to stay all along,” said Blythe.

“There were offers elsewhere and it came down to a choice of Bradford Bulls or a Super League club, but I had no intentions of walking away.

“I love being here and want to achieve something special as a Bradford player. The club has done a fantastic job in keeping the bulk of our current squad together for next year, which only made my decision easier.

“Seeing some fairly big names commit their futures to the Bulls is, in my opinion, a massive state of intent by the board of directors. Everyone wants to be a part of what could be a fantastic season and we look forward to getting preparations underway later this year.”

Blythe was reunited with one-time Warrington Wolves boss Lowes when the former Bradford hooker took over the coaching reins at the Provident Stadium, back in June.

Blythe, who enjoyed a loan spell in the sport’s second tier with Leigh Centurions, back in 2010, worked under the 1997 Man of Steel while plying his trade at the Halliwell Jones Stadium, where he spent almost seven years.

“I am delighted Matty has decided to crack on with us next year,” said head coach Lowes. “He is a selfless player who always gives 110 per-cent, bringing masses of enthusiasm to the team.

“Matty likes to carry the ball and he is a strong runner. There is no doubt he will be a key figure for us next year. One of his key attributes is his versatility. Matty can play just about anywhere and do a fantastic job. That will be priceless for us next season.”

Meanwhile, the Bulls have today confirmed that both Luke George and Elliot Kear will leave the club at the end of the season.