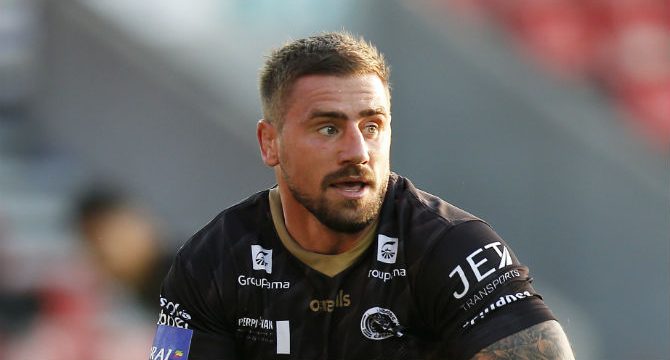 The waiting game for the start to Super League 2021 will last even longer for Michael McIlorum, who will miss the opening five rounds while still serving a suspension.

The Catalans Dragons hooker picked up a six-match ban for a high tackle and “other contrary behaviour” towards his Leeds Rhinos’ opposite number Brad Dwyer in last season’s play-offs, but he won’t spend the time dwelling on the incident as he is too busy focussing on extending his career in France and the possibility of taking up the green jersey of Ireland in the World Cup.

“It wasn’t the way I wanted it to go, but hopefully this year will be a bit better. The biggest disappointment for me was not being able to help the team the following week against St Helens.”

McIlorum said he hadn’t engaged with any of the media aftermath of the incident, adding: “I’m not into social media, so I didn’t pick up on any of that. It was what it was and it has been dealt with, so it’s time to move on.

“It’s already a long pre-season, but it’ll be even longer for me with the five games remaining on the suspension. Hopefully we will have some warm-up fixtures and maybe they could count with the ban, but either way I’m going to be missing the first four or five games.

“You can’t dwell on it, you’ve just got to work as hard as you can to be ready for that first game back.”

McIlorum’s reputation as a hard-nosed hooker was already established in the Wigan Warriors’ junior ranks before he made his first-team debut in 2007, but he says he has worked hard on trying to control the physical side of his game.

“I was pretty raw back in the day when I first started, but Waney and Madge (Wigan coaches Shaun Wane and Michael Maguire) really helped me to focus more on skill-based stuff and control certain parts of my game.

“It’s been a personal challenge for me to try to stay a bit more composed in games and be a little smarter when I’m coming out of the line, so I like to think I’ve developed my game quite a lot.”

McIlorum will have more time than most to develop his skill on the training ground this year as he serves out his ban, but when he is finally allowed to play, he says he will hit the ground running.

“I still feel as fit as I was ten years ago,” he said.

“Last season was so stop-start, with long periods of rest, that it was almost like having a year off.

“So while Coronavirus has been an absolute disaster for everyone, in terms of playing careers it’s been beneficial. We’ve never had so much recovery time between games and prolonged periods of training without the weekly collision. All the players will be on top of their fitness when the new season starts, which can only be good for the game.”

For all the physical benefits of a lighter workload, last season took its toll mentally on players, according to McIlorum, who added: “All we want is some consistency and stability now. The time off is one thing, but under lockdown you’re not allowed into training sessions or to meet up with the boys and at times it was hard to motivate yourself when you don’t know when you’re going to be playing.

“The biggest problem was not knowing. If you’re given a target to aim for, no matter how long it takes to get there, it’s fine, but every time we got going last year we had to stop again, and then we wouldn’t know when we were able to start again.

“It’s difficult, mentally, to deal with that when your whole career has been based around rigid targets, dates and fixture lists.

“And we’re playing the waiting game again now. As soon as our coach Steve McNamara knows anything he communicates it to us, but we’re still waiting for dates, and just keeping as fit as we can. All we can do as players is keep in contact with each other and try to motivate ourselves.”

McIlorum has just turned 33 and he believes he still has lots more to offer the game on the pitch, but he admits to feeling the passing of time when he sees former team-mates moving into coaching at top Super League clubs.

“After last year, there’s a lot of anticipation for the new season,” he said.

“It’ll be the usual suspects, I suppose, with Wigan and Saints pushing for the title, but Leeds have now got Sean Long in there and his input can only be a good thing for them.

“It’s good to see players like Long and Sean O’Loughlin involved in coaching. Lockers will bring a different dimension for Wigan and the players will want to do their best for him, they know what he demands.

“At Catalans we’re aspiring to be as consistently good as those top sides. It’s a work in progress and Steve and Richard (Hunwicks, the Dragons’ Performance Manager) are trying to instil a new culture here.

“They’re doing it from the ground up, starting with the young French kids, so they will know exactly what is expected of them when they do make it into the first team.

“It can’t happen overnight, but there has been massive progress already, and I’ve seen it in the three years I’ve been here; the structure is a lot better than when I first came.

“We’re all a part of it, the senior professionals get a bit of a buzz about seeing young French players coming through. We get lots of time with them at training sessions and it’s great that we can pass on our experience to the next generation.

“It doesn’t seem two minutes since I was just starting out and I looked up to people like Lockers; he’d give us his time and you learned so much. That’s our job now at this stage of our careers.”

McIlorum is happy with the Dragons’ recruitment so far for 2021, with former Wigan team-mate Gil Dudson and Castleford’s Mike McMeeken already on board in Perpignan.

“It’s what we missed a bit last year in the middles. At times we tired during games and I think these two signings will freshen things up.

“They’re both big lads too and their size will benefit our pack and also support the younger French forwards, which we are trying to push through at the moment because they are the future for the Dragons.”

The immediate future for McIlorum is serving his ban, then working on an extension to his career at Stade Gilbert Brutus. And there’s the possibility of an appearance in October’s World Cup.

“I’m still keen to play for Ireland if I get the call,” he said.

“I’d be very happy to pull the green shirt on. It’s a real buzz for players to take part in a World Cup, it takes you out of one playing and coaching environment and throws you into a totally different set-up.

“You’re working with new coaches and team-mates, so you pick up so much from international duty, even for players like myself who’ve been around a bit, there’s always something else you can learn.”