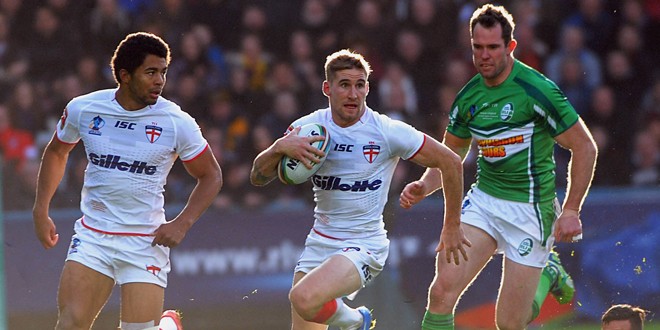 England head coach Steve McNamara has insisted he feels Sam Tomkins will be fit for next week’s series opener against New Zealand despite failing to be fit for this Saturday’s Test against France.

Zak Hardaker will take the role of full-back this weekend after Tomkins failed to recover from the problem which plagued him during his season with New Zealand Warriors in time for the game at Leigh Sports Village.

But McNamara says Tomkins is “really close” to contention, and says they won’t rush him if he’s not fit.

“He’s good; I said earlier in the week he’s on the right track and he’s really close,” said McNamara.

“We don’t want to push him until he’s 100 per cent right though; we need a fully fit Sam Tomkins to push himself into contention for next week and that’s the aim.

“We’re going to get plenty of work into Sam and we’re looking forward to hopefully having him available.”

McNamara could hand out several debuts on Saturday to a number of stars including Wigan duo George Williams and John Bateman, and the England boss admitted he’s been impressed with how the whole group have taken to camp since meeting up.

“International teams are full of international players who are first picks at their clubs, and it’s always a difficult process to pick a squad in terms of whittling it down.

“Some players are excited and some are disappointed but that’s part and parcel of international rugby league.

“I’ve been impressed with the whole group; they’ve obviously done lots of things right during the season to be selected for this group and you don’t often get much time with an England team to prepare, but I’ve been really pleased with them.”