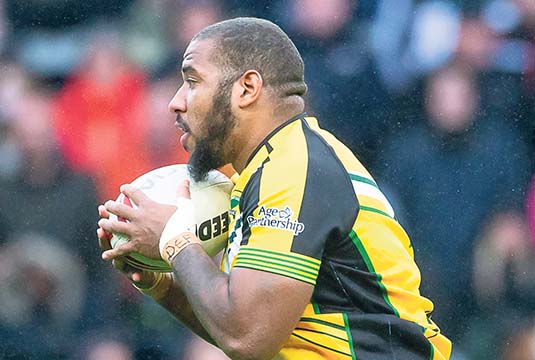 Gareth Walker hears why Ross Peltier is standing in the local elections next month.

There are some that believe sport and politics should never mix, but Ross Peltier isn’t one of them.

The Doncaster and Jamaica frontrower made national headlines last week over the fact that next month he will stand in his local elections in Birstall and Birkenshaw for the Green Party.

It’s rare for a sports person to be that actively involved in politics, especially while still playing, but perhaps it shouldn’t be.

Rugby League is noted for being immersed in its local communities, and that is what’s driven former Huddersfield, Bradford and Keighley prop Peltier to look to make a difference where he lives.

“I’m at the end of a qualification in built environment and civil engineering, and using renewable energy in building practices is something I’m very passionate about,” he explains.

“A lot of houses are being built in our area using traditional building methods that use up a lot of carbon, and people are fed up of it – it’s a greenbelt area that they want to preserve.

“My old team-mates at Bradford used to take the mick and say I’d be Lord Mayor of Bradford one day, and this will be a good experience and show me how the whole process works.

“It’s all new to me, but I’m looking forward to going out and speaking to people about our local area.

“I’m having a think about what we’re going to do with delivering leaflets and getting the message out.

“My mum and dad were both very active in the local community and politics is something I’ve always been interested in.

“The Green Party was the one that aligned most with my political thinking and what I identify with, and when the opportunity arose I thought I should jump at it.

“I’ve always wanted to do things a bit differently and never wanted to be pigeonholed.”

Peltier isn’t alone in the playing ranks in his desire for a greater focus on the environment.

His Jamaican team-mate and Sheffield Eagles back rower Joel Farrell is also active with the Green Party, and runs a Wild Minds initiative that hosts podcasts on environmental and mental health issues.

“Joel is doing a lot of things about getting out in the environment, experiencing it and taking care of it,” Peltier says.

“He’s been helping me a lot and putting his ideas in there.

“Wild Minds is helping people with mental health through getting outdoors, and it’s all aligned together.”

It’s a big year for both Peltier and Farrell on the field as well as off it.

Both have been among a host of key figures who have featured in the rise of the Jamaican national side over the last decade that play the sport part-time, and who self-funded their World Cup qualification in America.

Their reward is mouth-watering autumn clashes with New Zealand, Lebanon and Ireland.

“Qualifying was a vindication for a lot of us who had been involved for a long time,” Peltier says.

“People saw it as a novelty thing when we started a Jamaican rugby team, and we used to get the ‘Cool Runnings’ jokes.

“They didn’t take it seriously. But we always did, and now we want to inspire another generation of players.

“We self-funded most of our qualification, but the paying aspect we didn’t really care about – I was happy to represent my country and my family.

“From what we’ve seen it’s really growing over there in the schools and colleges, and hopefully seeing the World Cup will engage more people and it will really step up.

“Rugby League seems to have more of a presence on the island over union, there’s a wealth of talent coming through and we want to become a serious Rugby League nation.”

Before that, Peltier also has a Betfred League 1 campaign with Doncaster to look forward to.

“Pre-season has been going well,” he adds.

“With not having any friendlies this year it’s going to be a bit different, going straight back into playing.

“But with us, Keighley, Barrow and a few others in the mix, it looks like a good competition.”