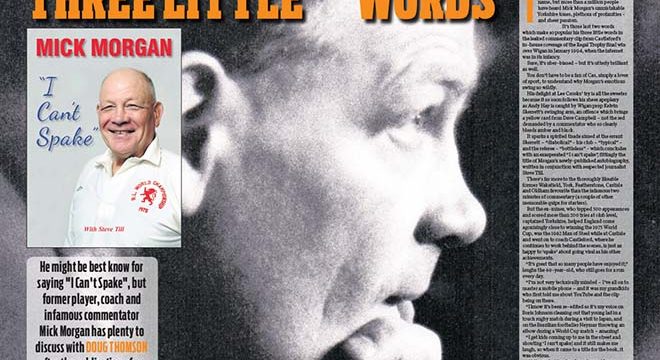 He might be best known for saying “I Can’t Spake”, but former player, coach and infamous commentator Mick Morgan has plenty to discuss with DOUG THOMSON after the publication of an autobiography

They might not all know his name, but more than a million people have heard Mick Morgan’s unmistakable Yorkshire tones, plethora of profanities – and sheer passion.

It’s those last two words which make so popular his three little words in the leaked commentary clip from Castleford’s in-house coverage of the Regal Trophy final win over Wigan in January 1994, when the internet was in its infancy.

Sure, it’s uber-biased – but it’s utterly brilliant as well.

You don’t have to be a fan of Cas, simply a lover of sport, to understand why Morgan’s emotions swing so wildly.

His delight at Lee Crooks’ try is all the sweeter because it so soon follows his sheer apoplexy as Andy Hay is caught by Wigan prop Kelvin Skerrett’s swinging arm, an offence which brings a yellow card from Dave Campbell – not the red demanded by a commentator who so clearly bleeds amber and black.

It sparks a spirited tirade aimed at the errant Skerrett – “diabolical” – his club – “typical” – and the referee – “bottleless” – which concludes with an exasperated “I can’t spake”, fittingly the title of Morgan’s newly-published autobiography, written in conjunction with respected journalist Steve Till.

There’s far more to the thoroughly likeable former Wakefield, York, Featherstone, Carlisle and Oldham favourite than the infamous two minutes of commentary (a couple of other memorable quips for starters).

But the ex-miner, who topped 500 appearances and scored more than 200 tries at club level, captained Yorkshire, helped England come agonisingly close to winning the 1975 World Cup, was the 1982 Man of Steel while at Carlisle and went on to coach Castleford, where he continues to work behind the scenes, is just as happy to ‘spake’ about going viral as his other achievements.

“It’s great that so many people have enjoyed it,” laughs the 69-year-old, who still goes for a run every day.

“I’m not very technically minded – I’ve all on to master a mobile phone – and it was my grandkids who first told me about YouTube and the clip being on there.

“I know it’s been re-edited so it’s my voice on Boris Johnson cleaning out that young lad in a touch rugby match during a visit to Japan, and on the Brazilian footballer Neymar throwing an elbow during a World Cup match – amazing!

“I get kids coming up to me in the street and shouting ‘I can’t spake’, and it still makes me laugh, so when it came to a title for the book, it was obvious.

“At the end of the day, I’m a fan and I was commentating on behalf of my club, and I got a bit carried away.

“It caused a bit of a stir at the time because I was sitting in the press box at Headingley, and various people from the Wigan club and their guests were just in front of me.

“They obviously weren’t happy because they were losing, some took objection to my comments, and they wanted me evicted. Some stewards came up to where I was sitting, and it was only the journalists behind me who stuck up for me and ensured I got to see out the game.”

That Regal Trophy (League Cup) final came almost 27 years after Morgan, born and bred in Featherstone, played his first senior match, for Wakefield against Batley at Mount Pleasant towards the end of the 1966-67 season.

“It was April Fools’ Day, and that was fitting, because I kept dropping the ball,” he recalls.

Morgan might have made the odd mistake when starting out, but he soon developed, and having begun his career as a budding centre, became a ball-handling loose forward, then a hooker or prop.

Having originally signed for Trinity in 1965 and learned the ropes in the A team, he spent 12 years at Belle Vue and was a beaten finalist three times – against Halifax in the inaugural season of the League Cup (then known as the Player’s No6 Trophy) in 1972, and as captain against Leeds and Hull KR respectively in the Yorkshire Cup in 1973 and 1974.

The disappointment at that trio of defeats was partially eased in 1975, when Morgan made seven appearances for England, helping Alex Murphy’s side win the European Cup before narrowly losing out to Australia in the World Cup, which was spread out over eight months and five countries and played on a league basis, with each of the five entrants facing each other twice.

Morgan played in England’s first four matches, with France beaten 20-2 at Headingley before the squad headed to the Southern Hemisphere for three summer showdowns.

“Touring was fantastic, and a real career highlight. I’d only been as far as Blackpool before I went to France for the European Cup, so to then go Down Under was brilliant,” explains the man who played against Wales in the famous ‘Battle of Brisbane’ –Murphy’s side were edged out 12-7 – and in the draws against New Zealand in Auckland and Australia in Sydney before a friendly win over Papua New Guinea in Port Moresby.

“The team spirit and camaraderie were superb, and Murph was great in instilling that. He stopped any club cliques forming by deciding who shared a room with who in alphabetical order. I was with Roger Millward, a fantastic bloke who taught me an awful lot.

“We were unlucky in the World Cup, because there wasn’t a final and Australia pipped us by a point but didn’t actually beat us, which gnawed away at them.

“It was losing to Wales in a real humdinger at Lang Park that eventually cost us.

“We then drew 17 apiece with New Zealand at Carlaw Park and 10-10 with the Aussies at the Sydney Cricket Ground, which was a match I really enjoyed.

“They were the firm favourites, and were trailing with just a few minutes left, then Bridgey (Featherstone’s Keith Bridges) came up with one of the best hooks I’ve ever seen to get us possession, when they had the feed at a scrum.

“Tommy Raudonikis was about to pick the ball up, but then we had it. Steve Nash set up Ken Gill, he went in under the posts, and then we were all square – what a feeling!”

The following year, Morgan had a benefit match against his hometown team Featherstone, who he was to join in the summer of 1978 after spending the previous season at York, who narrowly missed out on promotion from the Second Division.

It was a feat he went on to achieve both in 1979-80 with Featherstone and 1981-82 with fledgling club Carlisle, when he smashed the league record for tries by a prop, running in 25.

That extraordinary effort, coupled with his fund-raising work through the Rugby League Roadshow, earned him that season’s Man of Steel award. Morgan might have been 33, but he was far from finished.

After spending the 1982-83 campaign in the First Division as Carlisle’s player-coach, he remained in the top flight through a three-year stint at Oldham.

Morgan’s final season as a player, 1985-86, brought a memorable ninth appearance for Yorkshire (his first had come in 1973). Amid a white-rose injury crisis, the 36-year-old Morgan received a call from his old Wakefield coach Peter Fox – and was only too happy to help.

“Funnily enough, Lee Crooks was one of the lads who had to pull out of the squad, and when Pete rung me, I was delighted,” he says.

“We had a patched-up team, and the Lancashire side included some big names, but we went over to Wigan and licked them.”

The Tykes won 26-10 with the help of two tries by Bramley centre Andy Mason, and Morgan played 73 minutes at prop before giving way to Hull FC’s Andy Dannatt.

“It was one of the most satisfying matches of my career,” adds Morgan, who after hanging up his boots at the end of that season, joined Castleford to start up a club lottery.

He also had a stint as caretaker coach in between the departure of John Joyner and arrival of Stuart Raper in 1997, having earlier worked as right-hand man to coach Darryl van de Velde – he was alongside the Aussie when Cas went to Wembley for the 1992 Challenge Cup final and were beaten 28-12 by Wigan.

Perhaps that result still rankled with Morgan when he picked up the mic for that memorable Regal Trophy final two years later!

MICK MORGAN would love to see a Cumbrian presence in Super League.

Having spent two seasons at Carlisle in the early Eighties, he has a soft spot for the county.

“I understand the reasoning behind expansion, but I don’t think it should be at the expense of the traditional areas,” he says.

“Cumbria is a Rugby League region – the amateur game is strong and there is a loyal support base for the professional clubs up there.

“The county has produced some top players. Look at most Super League clubs now and you will find a Cumbrian in the squad.

“I look back to when I was playing and there were some top lads at Barrow, Whitehaven and Workington. When you went to any of those three places, you knew you were in for a tough game.

“They breed them big up there – the first time I went to Workington, when I tried to hang up my coat up in the dressing room, I couldn’t reach the peg!”

Morgan was at Carlisle from the club’s birth in 1981.

Set up by Carlisle United Football Club, based at their Brunton Park ground and wearing the same blue, red and white colours, promotion from the Second Division was won at the first attempt under player-coaches Allan Agar and Nigel Stephenson.

As well as those two and Morgan, the side included Steve Ferres, who went on to become a coach, then successful administrator at a number of clubs.

Having run in 25 tries, a league record for a prop, and earned the 1982 Man of Steel award, Morgan became Carlisle’s player-coach when Agar joined Featherstone, but was unable to stave off relegation from the First Division in 1983.

While Morgan moved to Oldham, where he played until 1986, Carlisle kept going until the end of the 1997 campaign, when the club was absorbed by Barrow.

By that stage, games were played at the smaller Gillford Park, now used by footballing minnows Carlisle City, which was also the name of a short-lived Rugby League club in the late Twenties.

This feature was first published in Rugby League World magazine, Issue 443 (March 2018) pictured. If you enjoyed it, why not consider taking out a subscription to read many more great features every month covering the whole world of Rugby League, from the grassroots to the international game and all points  in between?

Click here for print subscriptions (delivered worldwide) or click here for the digital edition, available online via your PC/Mac, smartphone or tablet.