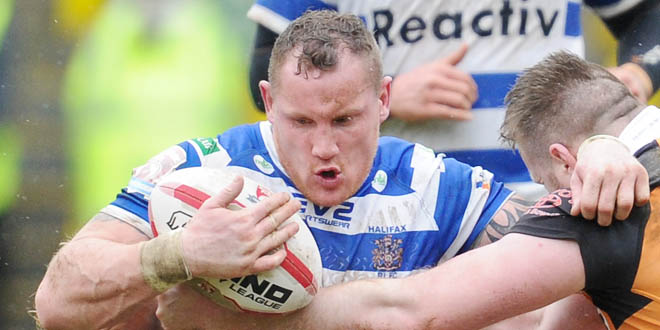 Former Bradford Bulls forward Richard Moore is hoping Halifax put on a seaside special when they face his old club at Blackpool in the Summer Bash on Saturday (7.00pm).

Moore signed for Halifax at the start of this season and is relishing the opportunity to go up against the Bulls in the exciting new addition to the Kingstone Press Championship calendar.

The 34-year-old, who was on the losing side when Bradford and Halifax met in league competition for the first time since 2003 at Odsal on Good Friday, can’t wait for kick-off on Saturday when the West Yorkshire rivals bring the curtain down on the opening day of Summer Bash.

“It’s my old club, so I’m really looking forward to facing them at Blackpool this weekend,” he said.

“I always get excited whenever I face one of my former teams, but I treat it as though it’s a normal game. I don’t change my preparation but this game against the Bulls will be very exciting given that it’s at the Blackpool for the first time.”

Halifax go into Saturday’s showdown having thumped Whitehaven 60-18 and whist Moore knows they can’t get too carried from last Sunday’s result, he appreciates the expectations of the club’s passionate supporters.

“We can’t get too excited,” he said. “No disrespect to Whitehaven, but they’re down near the bottom of the table and we’ve not beaten a team above us so far.

“The fans are great. They really get behind us. The lads mentioned it when they stood in the pouring rain at Odsal.

“I like the idea of the Summer Bash, too. Having played in a few Magic Weekends, I thought it was great to see fans from every club at one venue watching games over the weekend.

“Hopefully we can be the team to knock Bradford off their perch and start a charge towards finishing in the top four.”