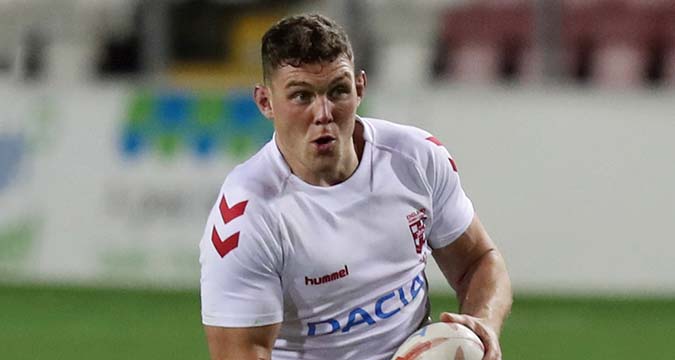 Robbie Mulhern hopes to fulfil his international ambitions following his move to Warrington.

The forward joined the Wolves last week in a swap deal that saw Luis Johnson head the other way.

Mulhern, who made his Super League debut with Leeds in 2014 before joining Hull KR in 2016, made his England debut in 2018 after being selected to join up with Wayne Bennett’s squad for the warm-up clash with France.

He subsequently went on tour with England Knights that autumn but, having now joined one of Super League’s biggest clubs, he hopes to push on and become a regular on the international scene.

“I mean this with absolutely no disrespect to Hull KR; I’ve loved my time there, I’ve not a bad word about anyone or anything about the club, but you’re more likely to be picked up and selected internationally if you’re around the top of the league and playing with international players,” said Mulhern.

“Moving to a new club never really crossed my mind, but in truth I just wanted a new challenge, so I jumped at it when I came up.

“It’s all happened very quickly, but when my agent Craig (Robinson) told me about it I jumped at the chance. Warrington is one of the biggest clubs in the country. Within two or three days of saying yes I met Steve Price and it went from there.

“I was surprised, as I had another year on my contract with Hull KR. But I said it’s fine for me and I was buzzing when Craig said it was serious. In the end it was all straightforward.

“It’s a big confidence boost. It was massive for me and a challenge to kick on to the next level. There are some fantastic players here and I’m under no illusions that I’ll be straight in the team, but I want to learn from them all.”

Mulhern believes that, as he approaches his prime years, he still has lots of improvement that he is capable of making.

“I think I can improve in nearly every aspect. There’s not one area I look at and think I don’t need to work on it. There’s always something to improve on, no matter how good you are.”