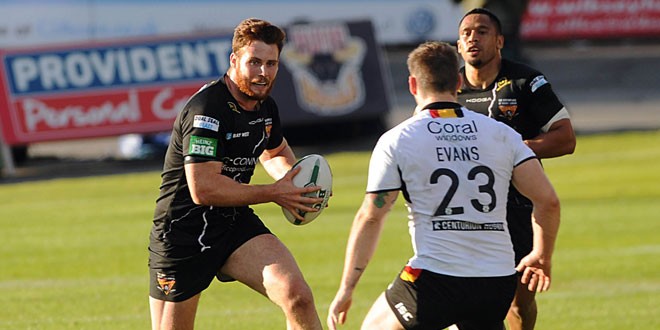 Bradford Bulls have signed 22 year old Ireland international Anthony Mullally on a one-month loan deal from Huddersfield Giants. The Lancashire-born forward is in contention for Thursday night’s trip to Wakefield Trinity Wildcats.
The former Widnes talent, who impressed while on World Cup duty for Mark Aston’s Ireland last year, is hoping to make a big impact at The Provident Stadium.
“This is a big opportunity for me, I cannot wait to get out there,” said Mullally, who began training with the Bulls on Tuesday.
“I want to have a big season and nothing has changed on that front for me. I want to make my presence known here.
“I am hoping to get a chance on Thursday evening and, from there, should I feature, I will be fully focused on maintaing my place in the line-up.
“If I can impress and play well, hopefully I will be able to play a fairly key role over the next few weeks.
“The history of this club speaks for itself and I am delighted to be a part of it.
“The boys have been great with me today and the atmosphere is fantastic.”
Mullally has featured on head coach Francis Cummins’ radar for some time and the Bulls boss has expressed his excitement, after the Giants prop signed a short-term agreement with the club.
“We are really pleased to have Anthony here and I am looking forward to seeing what he comes up with over the course of the next four weeks,” said Cummins.
“He is a player that we as a club have been monitoring for some time now.
“Anthony impressed during the World Cup, after a strong season both with Huddersfield and, on loan, at Batley.
“I believe he will make a similar impact for us, as he has done with the clubs he has appeared for in the past.”
Mullally replaces injured back-rower Tom Olbison in the Bulls squad for Thursday night’s game at Wakefield. Olbison suffered concussion during last weekend’s game against Castleford Tigers.
The only other change to Cummins’ squad sees Sam Wood replace fellow youngster Oliver Roberts.
Robert Hicks is to referee the contest, with Steve Ganson on duty as video referee.