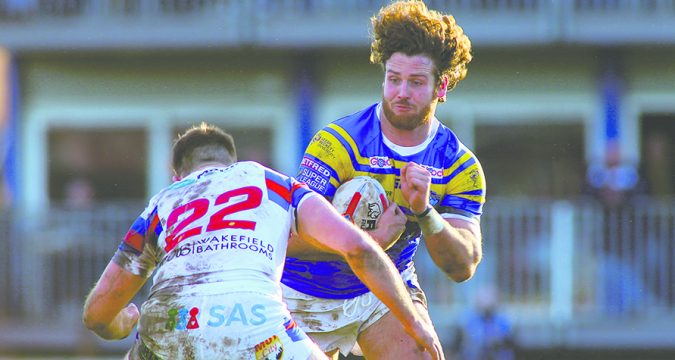 Wakefield remain keen on strengthening their pack for the 2019 season with the addition of one more prop forward – but it will not be Leeds’ Anthony Mullally.

Reports have suggested that the 27-year-old had emerged as a target for Chris Chester’s side next season, as they look to build on consecutive fifth-placed finishes in Super League in recent seasons.

Mullally had a short spell on loan with Trinity in 2015, helping them secure Super League survival in the Million Pound Game victory over Bradford – but he does not appear set to rejoin Wakefield for 2019.

While Mullally is one of several players who clubs have been alerted to as the Rhinos eye a major overhaul of their squad ahead of the arrival of new coach David Furner, League Express understands that the Ireland international is not on Wakefield’s radar.

They do, however, want to bolster their pack with one more signing before the new season. Trinity have been linked with Salford’s Craig Kopczak for a number of months, though it is still unclear whether he will leave the Red Devils over the winter to return to his native West Yorkshire.

Trinity are expected to confirm the signings of two deals exclusively revealed by League Express earlier this year in the coming months.

With Warrington’s season now complete following defeat in Saturday’s Super League Grand Final, the transfer of forward George King is expected to be announced in the coming weeks.

And Leigh half-back Ben Reynolds is expected be confirmed as a Wakefield player too in the coming weeks, after a deal was struck to sign the Centurions star from the crisis-stricken Championship side. He will provide competition for Jacob Miller and Ryan Hampshire following the departure of Liam Finn to League 1 side Newcastle.