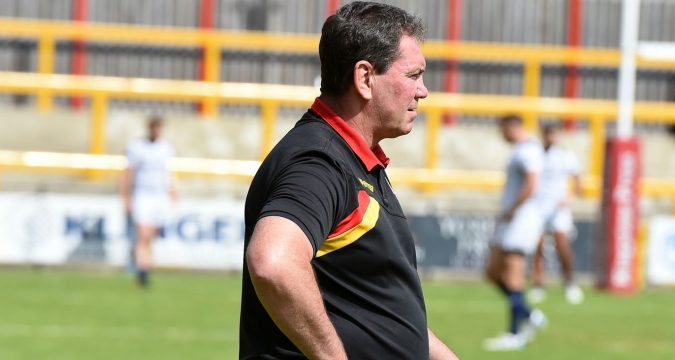 The revival Dewsbury Rams experienced under Neil Kelly in 2017 left many believing the 55-year-old was a worthy contender for the Championship’s Coach of the Year: but he doesn’t want to stop there.

The Rams were marooned to the bottom of the Championship when he took charge midway through last year: they ended up making the Championship Shield semi-finals following an impressive recovery.

Kelly told TotalRL in the run-up to their season-opener at Sheffield on Friday night that he can’t take all the credit for that – but admitted that there is no reason all involved with the Rams cannot aim high in 2018.

“My job as coach was to create an environment where the players could flourish,” he said. “I leave a lot of the technical ability to the senior players within the team, but I think the players understand me better than they did last year, and I’m hoping that’ll show on the field in terms of their performances.”

Dewsbury have recruited shrewdly in the off-season, adding players like Rob Worrincy and Martyn Reilly – as well as performing well in their friendlies. So what is the goal in 2018?

“I had a dream the other night that everything went swimmingly and we won the competition!” he laughed.

“That’s the dream, but realistically, if we can pitch ourselves between fourth and seventh alongside the likes of Halifax and Batley, who knows, we might just sneak into that fourth position. I realise it’s about getting wins early on, though.”

That process starts for Dewsbury against Sheffield on Friday night – and Kelly is acutely aware that, despite a tough off-season for the Eagles, it will be by no means a freebie for the Rams.

He said: “Sheffield is a good test because Mark Aston’s sides always have a dig and given where they are and where we are, it would be a bit of a shock. Mark Aston sides love a shock, don’t they?

“Yes, we’ve got confidence from pre-season but we’re not falling in love with ourselves. We know we’ve got to work hard in every game and we learned towards the end of last year what you’ve got to do to win a game in this division. Hopefully we can reproduce that and if we do, we will be more competitive in this division in 2018.”