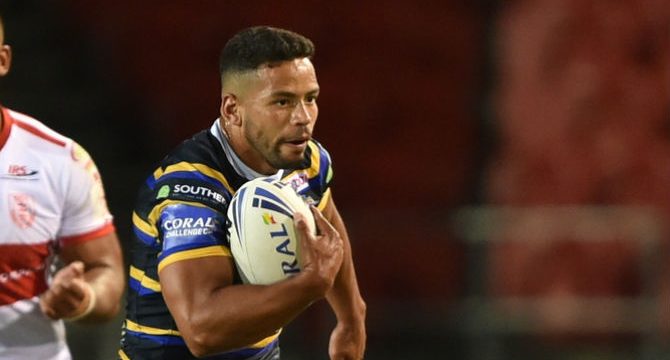 Former Huddersfield hooker Leeming will be at Emerald Headingley until the end of the 2024 campaign.

Meanwhile ex-Hull KR backrower Donaldson has agreed terms through to the end of 2023.

Both were members of October’s Challenge Cup-winning side, and both featured in Saturday’s Super League win over Wakefield.

Leeming joined Leeds ahead of last season, when he made 14 appearances.

“We have got good competition for the hooking spot in the team and that is only good for the squad as a whole,” said coach Richard Agar.

“Kruise is still only 25 and is a player with great potential.”

Leeming said: “It was an easy decision for me. The staff, players and fans have made me feel so welcome. To renew after just one year at the club says a lot.

“I am thankful to Richard Agar in particular for the faith he has shown in me. My job now is to repay that faith over the next four years.”

Donaldson, 29, was signed ahead of the 2019 campaign, when he made 25 appearances. Last season, he featured 16 times.

The Whitehaven-born player, who began his career at Wath Brown Hornets before joining Bradford in 2009, has made more than 200 career appearances.

He said: “It has been a journey to get to this point.

“I think I am a different player now than when I first arrived at the club. I am really excited about what the future holds for me at the Rhinos.

“I think I am playing the best rugby of my career now. I believe in the last year I have really managed to kick on, I have worked hard on my skills and I think in the next few years, the Leeds fans will see the best of me.”

Agar said: “James is an exemplary professional who has been a great addition to our squad.

“He is someone who works incredibly hard on his own game and is a great example for our younger players.”