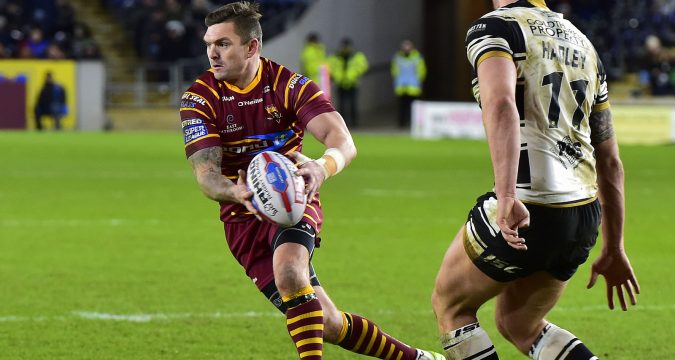 As revealed by League Express last month, the 35-year-old was offered a new contract by the Giants and he has now taken up the option to extend his stay with the Giants into 2019, taking him into his tenth season with the club.

Brough has been an instrumental figure in Huddersfield’s recent history. In over 220 games for the club he has scored over 1,600 points and was the star performer in 2013, when the Giants won the League Leaders’ Shield, their first major silverware for over 80 years.

“It’s always nice to know where your future lies, and it was an easy decision to make to stay here,” said Brough. “I’m really pleased to have signed the contract and, having seen so many others sign on with the club, I knew this is where I wanted to be. “All the boys think highly of the club and hopefully we can stick together long enough to get us climbing up the table. “After signing the extension, I just want to keep on playing as long as I can and make sure that I’m playing the best rugby that I can.”

Giants coach Rick Stone is happy to see the Scotland international staying with the Giants.

“It’s great to have Danny sign an extension with the club,” said Stone.

“He’s a big part of our team and what he does for us is invaluable, so it’s a good decision by all for him to have this contract extension. “He’s got a wealth of experience and his knowledge of the game is terrific. It’s important that he can pass on as much of that as he can to the younger blokes. “He’s really important to the team. His effort and his competitiveness are terrific, and his kicking game is as good as anyone else’s in the game, which adds so much to our team. “He is still going strong and we wouldn’t sign him on if we didn’t think this was going to continue to be the case. It’s a credit to him and what he’s achieved in the game and we’re delighted to have a player like Danny at the club.”