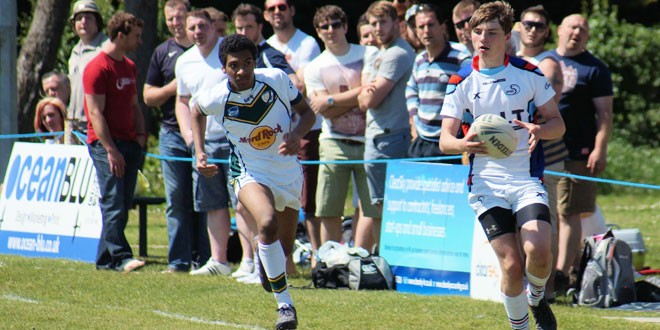 An exciting new junior Rugby League competition has been launched in Hampshire, with the help of the county’s leading community club Southampton Spitfires.
The innovative development project starts this spring under the banner of ‘Hampshire Youth Rugby League Association’ and aims to attract new teams from in and around the Hampshire area.
The organisers are keen to hear from existing Rugby League clubs in the region as well as potential new teams that would like to join the league.
To begin with the competition structure is based around a series of under 12’s festivals that feed into a league table and an end of season play-off. Other attractions include a post season East v West origin style test match and a knock-out sprint competition to find the league’s fastest player.
There is a firm emphasis on making match-days fun and giving kids as much ball-in-hand time as possible by reducing the teams to 10-a-side and eliminating goal kicks. Another adaption is the scoring system; a single point per try vastly reduces blow-out scores.
HYRL spokesperson Andy Moore explains the motivation behind the scheme, “At Spitfires we realised that for the cost of taking junior teams into London we could probably run a feasible league of our own, given the right platform. We held that thought for two years before deciding to risk it, but hopefully by getting the initial format right we can stimulate some growth at other clubs and find two or three new ones to make it a genuine development opportunity for the sport and not just a Spitfires spin-off.”
That initial optimism has proven to be well founded with interest from several new and established teams, the most eye catching of which is the formation of a team in Winchester which will be formally announced in the coming weeks.
The intention is to run two divisions of four and hold all games at a central venue to reduce costs in the first year. The Spitfires club is providing the infrastructure to host games and HYRL is working with the RFL to develop coaches, touchline managers, match officials and other supporting roles.
At the turn of the year Hampshire Youth Rugby League Association celebrated affiliation to the RFL and if successful the organisers hope to expand the project to include under 14’s next year.
Individuals wishing to start a team can apply to the league for help towards funding a coaching badge or request marketing support for their team. Full details of the project and how to register a team can be found online at: //HampshireYouthRL.Pitchero.com
You can also follow the league’s progress on Twitter @HantsYouthRL