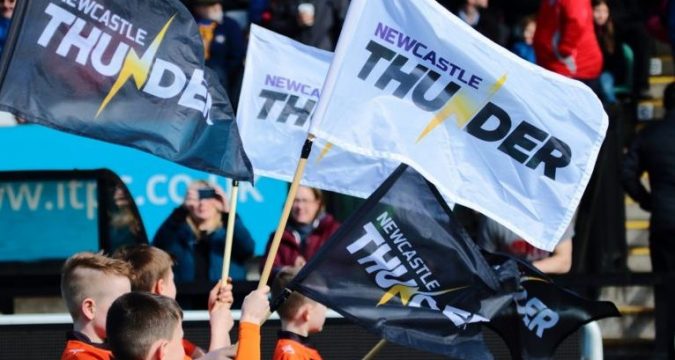 Newcastle Thunder will play in the Championship next season after being awarded a place in the competition.

The Tyneside club have been granted the 14th place in the division ahead of Barrow, Doncaster, Rochdale and Workington, who had also applied to take the spot that will be left vacant by an unannounced club heading to Super League.

Toronto’s expulsion from the top flight has resulted in promotion via licensing taking place. A four-person RFL committee, chaired by Dean Andrew OBE, were tasked with assessing the criteria of the five League 1 clubs.

Newcastle, previously known as Gateshead Thunder, re-branded in 2015 after being taken over by the owners of rugby union side, Newcastle Falcons.

They now play at Kingston Park, a stadium which boasts a 10,000 capacity, while they have been commended for their efforts to grow the game in the North East, with a number of community clubs emerging in the area.

On the field, they missed out on promotion last season after losing in the play-off final to Oldham.

Dean Andrew OBE, the former RFL President who chaired the panel, explained: “Newcastle Thunder was the unanimous choice of the panel, for an outstanding application. The club’s coaching set-up and facilities are superb; its community outreach is well-established and growing.

“Newcastle and the North-East has considerable future growth potential, backed by its owner – as has already been recognised by the decision to play the Super League Magic Weekend at St James’ Park for a fifth time in 2021, and also by Rugby League World Cup 2021 with five fixtures to be played in the region including the tournament opener in Newcastle.

“The club has a clearly-stated aspiration of Super League success this decade. Overall the panel thought its application most closely matched the vision of the RFL’s Strategy Reset.

“On behalf of the panel, I thank and congratulate all five clubs who submitted applications. The applications were comprehensive, thorough, they showed aspiration and ambition, and they were very honest.”