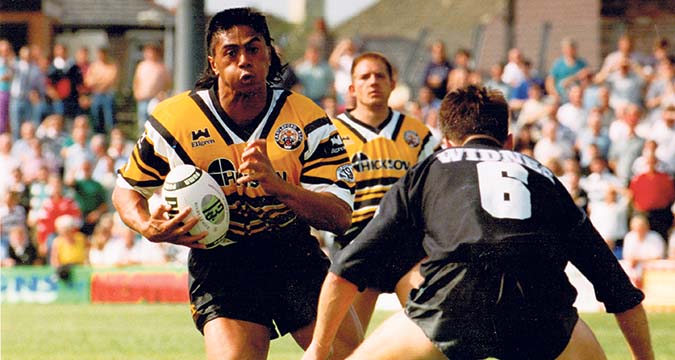 Kiwi legend Tawera Nikau will be the headline attraction of the Physical Disability Rugby League World Cup, which is due to be staged in the UK this November.

Nikau, who turned 54 on New Year’s Day, played for Sheffield Eagles, Ryedale-York, Castleford and Warrington Wolves. He has a wealth of World Cup experience, having played for New Zealand in the 1989-92 tournament before captaining Aotearoa Maori in their only appearance in the competition in 2000.

But two years after bringing the curtain down on his glorious Rugby League career, Nikau had his right leg amputated following a motorcycle accident in 2003.

The disability hasn’t held Nikau back. He has run three New York marathons and even managed to beat Tea Ropati, another ex-Kiwi, in the boxing ring.

Now he has turned his attention back to Rugby League and aims to help his side take the trophy back to New Zealand.

“With the PDRL World Cup on later this year, pending Covid, I’ve made myself available for the New Zealand team,” he said.

“It would be great to take home the World Cup and that’s what we’ll be looking to do. We’ve done pre-season training and the boys are looking good.

“We’ll be playing England, Scotland, Wales and Australia and it’s going to be held at Warrington, so it’ll be great to play there again. Physical Disability Rugby League is pretty brutal and I’m pretty new to it, but I do have some experience. I played in a fundraiser for the Christchurch earthquake nine or ten years ago.”

The former Melbourne Storm Grand Final winner is also keeping an eye on British Rugby League because his son signed for his former club York during the winter.

Tyme Dow-Nikau signed for the Crusaders last year but didn’t play for them because of the pandemic.

“I speak to him every week and he’s really enjoying it,” said Nikau.

“It’s great that he’s playing for them 30 years after I was there. I really enjoyed my time at York. He’s even trying to copy my mullet and he’s staying with some good friends of mine.”