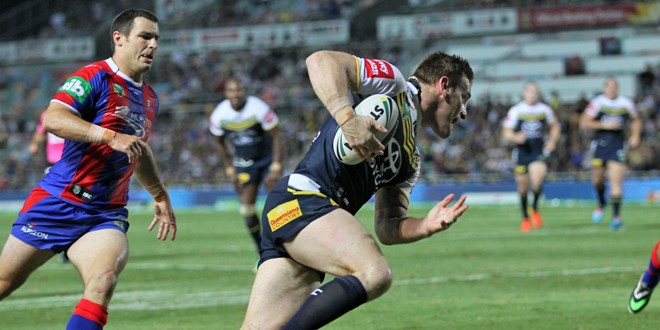 In a nutshell
North Queensland ended their three-game losing streak by putting in a commanding performance, restricting Newcastle to a solitary score and romping home by 26 points.

How it unfolded
7′ – Tyrone Roberts lands a penalty goal to put Newcastle in the lead.

28′ – Full-back Michael Morgan goes over for North Queensland’s third try with a great assist from Thurston, who converts to make it 16-2.

48′ – Morgan gets his second of the night after chasing his own grubber kick. Thurston successful with the extras: 22-2.

62′ – Ray Thompson extends the Cowboys’ lead by sprinting 35m out of dummy half. Thurston’s extras make it 28-2.