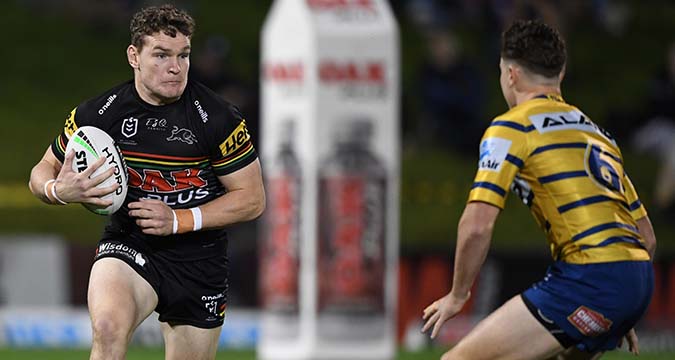 Patience is key
Penrith could have found it really frustrating during their first half against Parramatta. They made too many errors when close to scoring. It took them 40 minutes to get over the line but they finally managed it and went on to completely dominate the second half.
Other sides would have struggled mentally to deal with that situation but that’s why they’ve won 13 games in a row. Will they be stopped before they land the Premiership? None of the sides are playing well enough at the moment to compete with them.

Rugby is just a game
We all love the game we watch but the news of Boyd Cordner’s cousin, Joel Dark, who died on Friday whilst playing for Newcastle Central, was heartbreaking.
Cordner struggled to get through an emotional tribute to his family member before the Roosters’ game against Newcastle. But once Sydney got going, they were unstoppable. But it’s stories like these that remind us that rugby is just a game. Life is more important.

Lightning doesn’t strike twice
Try telling Huddersfield that! But Wests weren’t able to pull off a second brilliant comeback in as many weeks. They came just short after coming back from 26-12 behind to finish only two points behind the Rabbitohs.
Souths are a good side in good form but that defeat ended Wests’ hopes of a Finals position. It’s back to the drawing board for them despite another decent campaign.

You just need heart
Rugby League is a simple game. Sometimes you just need to run harder and with more heart and you’ll burst through and score. That’s just what Toby Rudolf did for Cronulla to seal their place in the Finals in 2020.
The Warriors needed to beat the Sharks to have any chance of catching and they were in front until Rudolf barnstormed his way straight behind the ruck for his first NRL try. He simply wanted it more and that’s why the Sharks are progressing. Easy when you know how!

Melbourne need to improve
It looked as though they were on for an easy victory against North Queensland but the Cowboys were able to score three quick tries in the second half which won’t impress perfectionist Craig Bellamy.
The Panthers are in such red-hot form that the Storm will have to be at their best to have any chance of winning the Premiership. And while they easily secured the win, they’ll need to improve as the playoffs progress.

Canberra are still contenders
They may be in a fight to finish in the top four but they’re still more than capable of mixing it with the big boys. They destroyed St George on Saturday, again, led by their English contingent, ably assisted by Jack Wighton.
George Williams has had a quality season with the Raiders and John Bateman has added plenty after returning from injury. Ryan Sutton has improved no end this season. It’s great to see!

Gold Coast are the best Queensland side
Who’d have thought we’d be saying that this time last year!
Brisbane and North Queensland have been so poor this season and that’s allowed Gold Coast to steam ahead of both to be the best in the state. The Titans are now level with three other teams and could yet finish 9th this season, a quality achievement for Justin Holbrook.
They made light work of the dire Broncos on Saturday, led by former Brisbane star Ash Taylor.

Canterbury have what it takes to avoid the spoon
They don’t show it often and can’t sustain it but they only need one more win than Brisbane in the last two games with their superior points difference.
They don’t often incur a rollocking but always seem to just miss out on victory. The Bulldogs worked up a deserved 10-0 lead against Manly but let it slip in ten poor minutes. A tough trip to South Sydney follows for the Dogs.