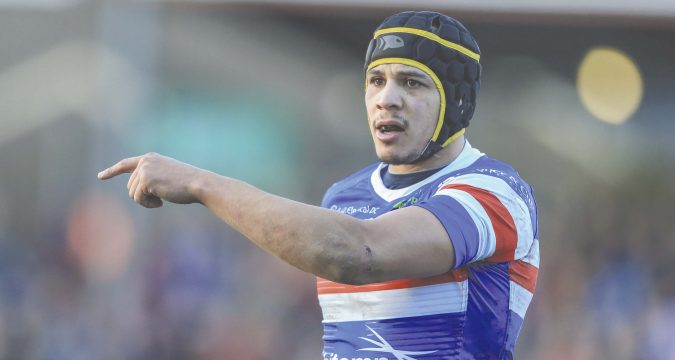 Ben Jones-Bishop has admitted he feared the worst after spending almost a year away from the game due to blood clots on his lungs: but says he’s now determined to show he can still perform at the highest level after making his return last weekend.
Jones-Bishop made his first appearance of 2020 during Wakefield’s narrow defeat to Hull, having been diagnosed with the blood clots late last year. That left him unable to train with his team-mates, and fearing a future away from the sport at the age of just 32.
However, having initially decided to sit the remainder of this year out, Jones-Bishop answered the call from Wakefield to return to playing, and says he couldn’t be happier.
“It’s been a long, challenging journey,” he told League Express. “To call it tough would be an understatement.
“When it all emerged, I just didn’t have a clue what was going on. I was told I’d have to wait three months between the scans to see if they would clear up, so that’s three months where you just have to sit around and wait, not knowing what your future holds.
“You can’t speed up the process whatsoever. It’s been indifferent enough for the game, but to have been going through all this as well is crazy. My intention was to return at the end of May, but then lockdown happened, and when the plans changed, I took the emotion out of everything and decided it would be better to take the year off.
“I couldn’t thank Michael (Carter) and Chezzy (Chris Chester) for their support, but I got the call a few weeks ago and decided to go for it.”
Jones-Bishop continued: “With the scans so long apart, it does knock you. I had a goal to be at next year’s World Cup with Jamaica but at one stage, that looked uncertain. It knocks you, it really does, watching everyone train when you can’t.. but once I got the all-clear, it was such a relief.
“I thought it might be best to take the year off initially with all the changes to the game and having spent so long out, but I got a call asking me to return to training and I jumped at it. I didn’t want to leave Wakefield short after everything they’ve done for me, so it was an easy decision.”
Jones-Bishop’s contract with Wakefield expires at the end of this season, and admits he’s now reconsidering his initial plan to go part-time in 2021, such has been his experience of returning from the lay-off.
“I’m available,” he laughed.
“I know I can perform and I believe in my ability. If Wakefield agree, then great, but if not, I’ll be fit and available for someone in 2021.
“I’m still intending to play on without a doubt. The plan was to go part-time but now I’m back, I’m really open to staying full-time and carrying on if someone sees something in me. The time off has given me opportunity to pursue my interest in property, and that’s coming on nicely, but I believe I can still perform.”