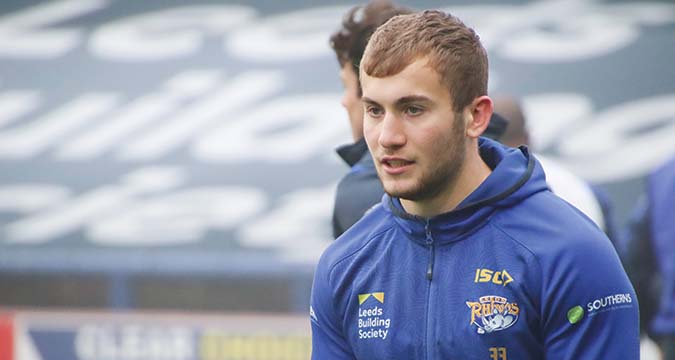 Hailing from Widnes, it’s perhaps a little surprising that Jarrod O’Connor has progressed through the Leeds Academy.

However, the opportunity presented itself when the Vikings, for whom O’Connor had signed as a youngster, went through financial troubles in 2019.

“The move from Widnes to Leeds came about when Widnes unfortunately ended up going into administration,” says O’Connor.

“I just remember sitting on the couch watching a film and my dad coming in and letting me know that Leeds were interested in signing me.

“I had mixed emotions, because I was both excited that such a big club like Leeds wanted to sign me, but also sad because I would have to leave my hometown club who I support.

“It all happened fast after that and I ended up signing later that day, but it ended up being a good decision for my career as I made my debut last year and have pushed my way into the first-team squad.”

As a son of Terry O’Connor, Jarrod, 19, was always likely to pick up the oval ball, but he insists that doing so was entirely his decision.

“Rugby league has always been my sport since the age of 7,” he says.

“Before that, I played football with my school friends, but one day I asked my dad if I could play rugby, which was inspired by my dad being a player.

“He never made me play and instead waited for me to ask to start playing, because he didn’t want to force me.”

The state of affairs in 2020, thanks to COVID and the bunched-up fixture list, meant that young players like O’Connor were able to get some game time. Despite being a loose-forward, he was drafted in to play hooker by Rhinos coach Richard Agar. He made his debut against the Catalans Dragons on 30 September, which he will never forget, and he went on to play four games in total.

“Making my debut was one of the best moments in my rugby career, especially playing with all the younger lads in the squad,” says O’Connor.

“I was gutted that fans couldn’t be there, especially my girlfriend, family and friends, but due to Sky, my dad was lucky enough to be there as well as my uncle Barrie McDermott.

“Luckily enough the next game was on Sky so everyone could watch me, which was a special feeling because it was a dream of mine to follow in my dad’s footsteps.

“I think the squad really helped me in the games and the environment ended up becoming more familiar.

“By the Wakefield fixture, I felt a lot more comfortable with the speed and intensity of Super League.

“Playing with and against all the players I did throughout last year has really given me the confidence to push on in 2021.”

After those four appearances in 2020, teenager O’Connor is determined to top that total in 2021.

“Although I’m still young – 19 until July – I feel like I can really start pushing for a spot in the squad and the team every week this year.

“I still have a lot to learn, which the coaches and players around me help a lot with, but I believe I am going in the right direction.

“I just want to play the greatest number of games I can this year and help the team get more silverware in any way possible.”