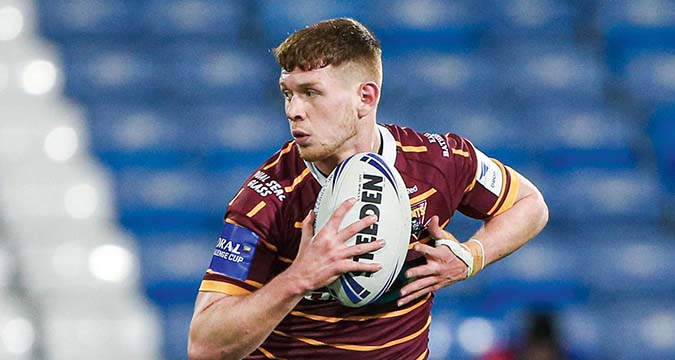 For Olly Russell, it’s been a case of trying to escape the limelight provided by grandfather Jimmy and his dad Richard.

Whilst the former starred for Huddersfield, his father was an integral part of the Oldham, Wigan and Castleford sides, playing for the Tigers during the first three years of Super League.

When Russell, now aged 22, was a teenager he left the Wigan Academy to join Huddersfield, making his debut in 2018.

“I left halfway through my second year to join up with Huddersfield,” he explains.

“I made my debut in 2018 (against Widnes on 4 May) and it was a dream come true. It was also something I didn’t expect to do in that season while I was still in the Academy.

“I went on to make five appearances that year, which was a bonus. The debut was also more special for me because Jake Wardle made his debut on the same day.

“We got the win whilst the first team was on a bit of a losing streak, which really made it more special.”

Halfback or hooker Russell has spent time on loan at Leigh, Batley and Workington, all of them experiences he is grateful for.

“I certainly enjoyed my short time at all of these clubs,” he admits.

“They gave me some vital experience, playing more first-team rugby and it definitely helped me to get used to the physical aspect.”

Russell knows he has his work cut out to get in front of Aidan Sezer, Lee Gaskell and Jack Cogger in the halves for the Giants, but he hopes his time will come.

“My goals for 2021 are to keep improving my game and learning from the older halfbacks in the squad like Sezer and Gaskell and to try and play a few more games than I did in 2020.”

Huddersfield are rebuilding under new coach Ian Watson with the likes of Luke Yates, Jack Ashworth and Ricky Leutele as well as Cogger, all moving to the John Smith’s Stadium and that has left Russell believing that the Giants can win silverware in 2021.

“With the squad we have built, I can see us pushing for silverware,” he insists.

“With the first week of pre-season nearly done, I can feel Watto is going to get the best out of all of us.

“With the group of young lads and the experience that has been brought in, there is no reason why we can’t be picking up silverware.

“I’m really excited to see where this squad can go this season.”