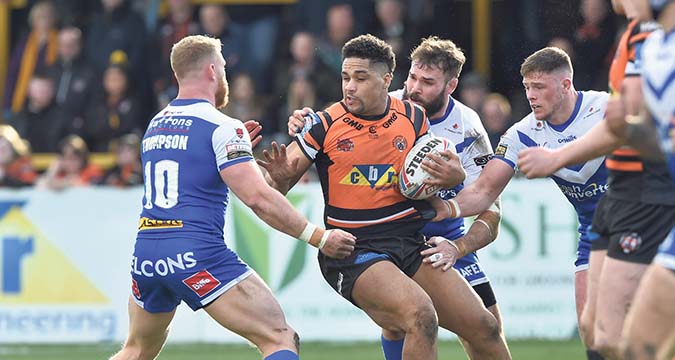 Derrell Olpherts is gearing up for a double date with his former club as Castleford aim to keep their bid for success on two fronts firmly on course.

For after heading to Wigan for an attractive-looking Super League showdown on Thursday, the Tigers will take on Salford twice, with an AJ Bell Stadium meeting on Friday, April 30 followed by a Challenge Cup quarter-final clash at Headingley on Saturday, May 8.

Yorkshireman Olpherts spent 2018 and 2019 with the Red Devils, making 42 appearances and scoring 16 tries, before heading back across the Pennines to join Castleford on a three-year deal ahead of the 2020 campaign.

Having scored eight tries in 15 games last year, the 29-year-old winger, who played for Hemel Stags and Newcastle Thunder before his move into the top-flight, is aiming for another productive season in black and amber, but says his game is about more than scoring.

“Obviously as a winger, you want to be finishing well,” said Olpherts, who went over twice during the dramatic 33-32 golden-point win at Hull KR in round three of the Challenge Cup.

“But you have to play a bigger part for the team, take the ball in early in the count and help gain some yardage.”

Olpherts has yet to return to Salford, with last season’s sole clash between his current and former clubs taking place at Headingley, where the Tigers won 37-30.

“It will be interesting,” he added.

“I still keep in touch with quite a few people there, and it will be good to see them again.”

Of course home is now the Mend-A-Hose Jungle, and after playing there for only the second time in the last twelve months against Leigh on Friday, Castleford are looking forward to running out there in front of spectators once again when Hull KR visit on Monday, May 17.

“I think everyone has missed having the fans at grounds.” added Olpherts.

“Not having them there has been especially obvious at places like Castleford and Wakefield, where they are so close to the pitch.”I love the atmosphere that creates.”