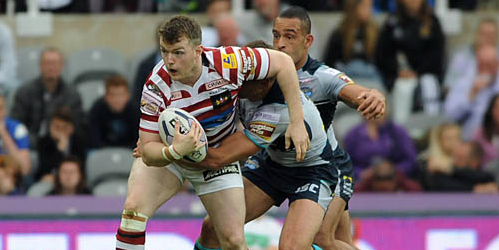 The eagle-eyed reader will have spotted yesterday that Wigan chairman Ian Lenagan made a fairly heavy remark about the reserve and dual-registration system in Rugby League.

Speaking after Connor Farrell’s loan move to Widnes for 2016 was confirmed, Lenagan described the system as a “shambles”, saying:

“Connor is a good young player who needs to be playing Rugby League regularly at a competitive level and the current shambles of Reserves/Dual-Registration does not allow that opportunity.

“We believe this move will help Connor achieve more senior game time which will help him improve as a player and allow him the chance to show his capabilities regularly on the Super League stage.”

But is Lenagan right? Chairmen do have a tendency to over-egg the pudding sometimes in sport – but on this occasion, Lenagan is 100% on the money.

Have a quick look on the RFL’s website at the fixtures for the new reserve league. There’s only a handful of Super League clubs that have decided to taken part – the rest, for whatever reason, just not deciding to bother.

In this particular instance, clubs like Wigan, St Helens and Hull FC have all decided that the need to get some of their youngsters gametime is worth the investment in setting up a reserve league – and for that, they should be commended.

But this is a situation in which the RFL should have taken the bull by the horns, so to speak. There are obviously clubs who have handy dual-registration agreements with lower league sides in their local area, but why not enforce a reserve grade, too? Otherwise, you’ll find League 1 clubs will become over-reliant on dual-registration, which hinders them in the long run.

The fixture setup for the reserve league is, quite frankly, laughable. Speaking to coaches last year who were keen to get this set up, I imagine they’re just as frustrated. You only have to look at Wigan’s fixtures – as pointed out on the WiganToday.net website this morning, they have no fixtures in March, and just one in April! They’ll only play a clutch of games throughout the entire year in fact: hardly a reserve league, is it?

The creation of a reserve competition was an end to a lot of the game’s problems regarding youngsters not getting enough games. However, the whole concept has been completely botched and in not forcing clubs to enter the system, the age-old problem with dual-registration will barely be affected in 2016.

You’ve even got more clubs from outside of Super League putting up reserve teams; the Championship/League 1 had an effective reserve competition last year too which quite frankly, puts Super League to shame.

It’s time the RFL told clubs to get on board – they are the game’s governing body, after all. Dual-registration and reserve systems can work hand-in-hand, it just needs the right management.