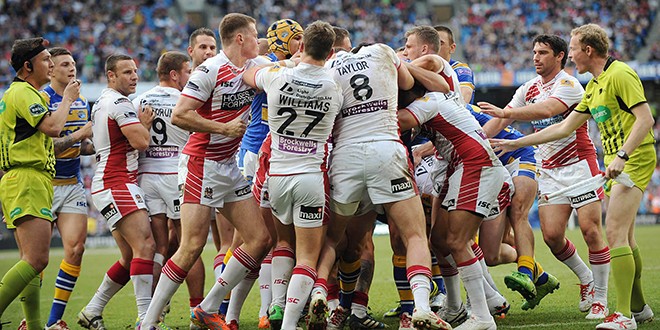 Anyone who likes watching Super League on TV must have enjoyed the two offerings from Sky Sports last Thursday and Friday night, with Warrington and Huddersfield finishing level, and then St Helens edging out Leeds by a single point at Headingley on Friday.

The season, at least for TV viewers, seems to be ending with a bang, and it should continue tonight when St Helens host Warrington and Wigan host Leeds on Friday in a match they are promoting at The Big One.

Wigan are expecting a very big crowd indeed on Friday night, and not just because they are playing the Cup holders.

This article originally appeared in Monday’s edition of League Express newspaper. Click here to download the digital version to your computer, phone or tablet

Before Wigan and Leeds take to the field there will be a game involving some of the legendary figures of three Wigan club, with the great Andy Farrell the latest of their former stars to add his name to the list of players who will turn out for the Joining Jack charity.

It promises to be a terrific night, and my only advice to any readers of this newspaper is to get down to Wigan and plonk yourself down on a seat in the DW Stadium.

Wigan have done a great job promoting this game, and, in association with the Joining Jack charity, they’ve done a great job in attracting so many former players to take part in a curtain-raiser for the game they are branding as ‘The Big One’. And it will be a massive game, with both Wigan and Leeds still hoping to finish in second place in Super League, but with the possibility that they may finish as low as sixth if they lose on Friday.

The previous night St Helens will win the League Leaders’ Shield if they can beat the Wolves.

So I would hope that they would come very close to selling out Langtree Park when so much is at stake.

And Saints have absolutely no guarantee that they will beat the Wolves.

Only Castleford can now catch them, and the Tigers have their own derby game against Wakefield Trinity Wildcats next Sunday, and no doubt they will fancy their chances of winning that game, despite Wakefield’s fine performance in putting Salford to the sword on Sunday.

This article originally appeared in Monday’s edition of League Express newspaper. Click here to download the digital version to your computer, phone or tablet

The RFL has justified its decision to reorganise the leagues on the basis that it wants to make every minute of every game count.

But with two games to go in the Super League season, and one game in the Championship season, the current structure doesn’t seem to be doing a bad job of making every minute count, as we saw last Thursday and Friday, and no doubt as we’ll see this Thursday and Friday.