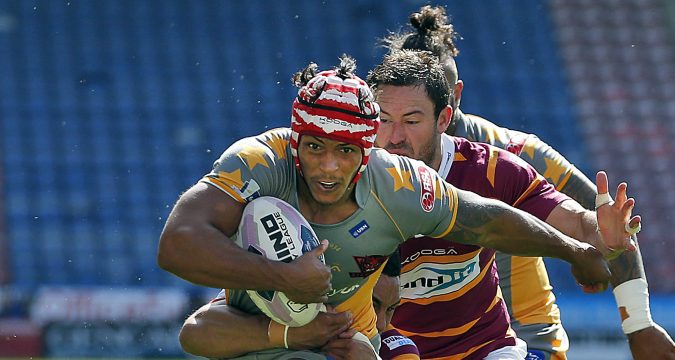 Salford fans were left bitterly disappointed when we leaked the news that Daniel Vidot will miss the first-half of the season, with the WWE-bound star likely to be out until August.

Inevitably, the news resulted in suggestions that the Red Devils may look to reinforce their squad with a new arrival, with a number of names mentioned. But having already spent big in the off-season following the likes of Robert Lui, Justin Carney and Vidot himself coming in, the chances of Salford finding room under the salary cap are slim.

Besides, Vidot’s long-term absence isn’t a disaster as Salford only have to look internally to find an ideal replacement for Vidot in the shape of Greg Johnson.

It was evident from Salford’s recruitment drive that there was a strategy to add size to their outside line. We all know what Justin Carney brings to the table while Vidot would have brought more of the same on the other wing. Inside of them, Junior Sa’u and Josh Griffin are uncompromising centres that will cause plenty of damage given the right service from the halfbacks.

Although Vidot will be missing, Johnson fits the mould perfectly. The 25-year-old is billed at around 15 stone and has 20 tries in 56 Super League appearances, which is a decent record considering he has largely played in teams at the bottom of Super League. It’s hard to predict how Salford will do this year, but you can put good money on their outside backs seeing plenty of the ball in 2016, which may allow Johnson to really showcase his talents more consistently this year.

Speaking to TotalRL, Salford head coach Ian Watson has admitted that Johnson is the prime candidate to replace Vidot.

“Greg Johnson is a great player – one of the best wingers we had last year,” he said.

“It’s not guaranteed he would have missed out anyway; looking at Daniel and where he can play, we actually had that right centre spot in mind. So Daniel signing never actually guaranteed that Greg wasn’t going to play.”

The challenge now is on Johnson to produce the goods. He has the service in the halves, with Lui, Michael Dobson and Gareth O’Brien all vying for the two spots, and he certainly has the support in the backs. That’s a total contrast to last year when Salford struggled to give their edges enough of the ball, largely down to the long-term absences of Dobson and Rangi Chase.

If Salford fail to get the ball out wide, the injury to Vidot will be irrelevant anyway, certainly from an offensive point of view. However, if they do get it out wide, you can expect to see Johnson’s name on the scoresheet more often than not.