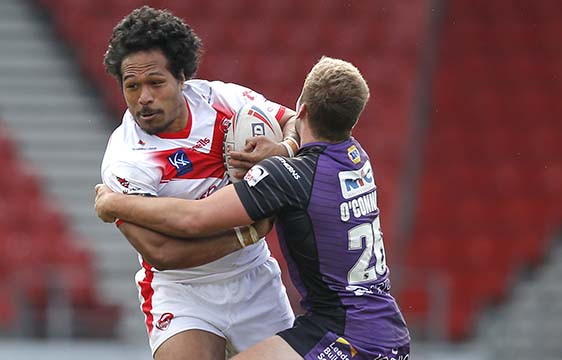 The newly-signed Tonga international made a big impression on both his coach and watching BBC viewers as Kristian Woolf’s side edged past holders Leeds on Saturday to make the quarter-finals.

Paasi, known as Iggy and signed from New Zealand Warriors on a two-year deal with the option for a further twelve months after that, came off the bench during the 26-18 victory at the Totally Wicked Stadium.

“He produced some great carries, he has good footwork and a proper skill set, and he backs it up with some great defence. I think he’ll give us a lot this season.”

Saints led 20-6 after a strong start to the second half against twelve-man opposition (Leeds loose-forward Zane Tetevano was sent off for a late hit on Theo Fages after 44 minutes), but allowed their visitors back into the tie and needed a late try by Tommy Makinson to put the game to bed.

And 29-year-old Paasi, who has also played for Gold Coast Titans, knows he and his side will have to tighten up ahead of Friday’s home Super League meeting with Wakefield Trinity.

“We had a lucky escape against Leeds,” he admitted.

“After we started the second half so well, we released the pressure and let them back into it.

“We didn’t contend the middle and gave their hooker too much space, and that’s something we need to fix up, which we will do. We won’t let it happen again.”

Since winning the Challenge Cup three times running between 2006-08, Saints have reached only one final, losing 18-4 to Warrington in 2019.

“It was before my time here, but I know we got kicked out in the quarter-finals last season, and this time we want to make amends.”

The 30-year-old came through the club development system to make his debut in 2009 and has made 243 appearances, scoring 111 tries, earning a testimonial in 2019, when he won the League Express Albert Goldthorpe Medal.

“I have had my ups and downs while I have been here, but now it is about me giving back as much as I can,” said Lomax.

“I want to show the loyalty the club has shown me as well as the support the fans have given me over the years.”