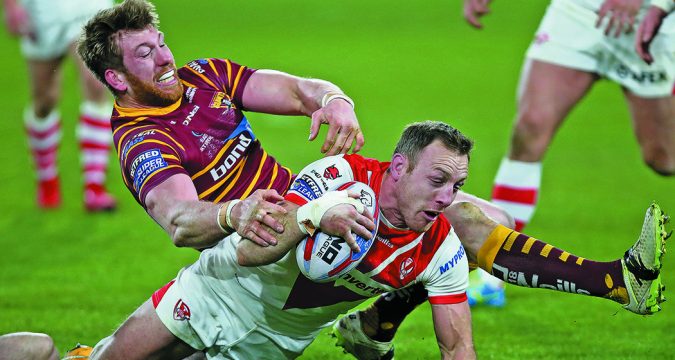 The season is just a month old, but already, we’ve had plenty of action and talking points to get stuck into.

There have been shocks, moments of brilliance, an attack on journalists, plenty of dismay on the terraces and even the departure of a head coach.

But among all of that, a number of clubs have stood out from the rest with some eye-catching results and noteworthy performances. We’ve picked out four of the best teams so far this year, but who is your pick? Don’t forget to vote at the bottom of the article.

They came into the season as red hot favourites but even the most optimistic St Helens fan couldn’t have wished for a better start.

The highlight of the year so far came in round one as they crushed last year’s Grand Finalists, Castleford, at The Totally Wicked Stadium.

It was a performance and a result that made everyone stand up and take notice, and what’s followed hasn’t dimmed their star. Victories over Catalans and Huddersfield weren’t as eye-catching, but have ensured St Helens are top going into March. In the eyes of many, the biggest challenge facing Wakefield this year was the ability to handle expectation.

Chris Chester’s side are unbeaten and are the joint pacesetters in Super League. The encouraging thing for Wakefield is that they’ve yet to hit full pelt, but they’re still chalking off wins.

Bigger challenges await, but it’s been a near-perfect start. So much for a battle against relegation battle!

The Broncos were, in hindsight, badly tipped to finish somewhere near the bottom of the Championship.

But they’ve quickly made many re-evaluate their early season predictions after a stunning start to the season.

They went under the radar with opening round victories, but later triumphs over Featherstone and Toronto, two of the competition’s big-hitters, have put everyone on notice.

London are the only unbeaten side in the Championship and have a two-point cushion at the top of the league. The French club have enjoyed a solid start to the season, a point emphasised by their incredible victory over Leigh Centurions, that ultimately cost Neil Jukes his job.

But Toulouse have impressed on home soil as well, completely decimating Swinton and Sheffield.

Bigger challenges await and they did suffer defeat to Featherstone, but by defeating Leigh they’ve proved they’re ready to test the big-hitters in this league once again.