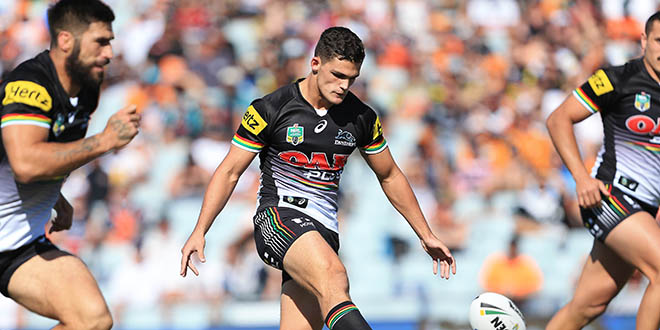 Penrith Panthers move into the second week of the NRL Premiership play-offs when they defeated Manly 22-10 in the first Elimination Final today at Allianz Stadium in a match characterised by some tight decisions by the Bunker that the Panthers gained most of the benefit from.

Penrith took an early lead with a penalty from Nathan Cleary, but the Sea Eagles hit back with a superb try to Dylan Walker, who collected a kick over the Panthers’ defence from Tom Trbojevic for an unconcerted try.

The Panthers took the lead again with a try from Bryce Cartwright six minutes before the interval, which was converted by Cleary before the Panthers’ halfback added another penalty on the half-time hooter to give his team a 4-10 interval lead.

On 48 minutes Walker had a second try turned down by the Bunker, who overturned the on-field referee’s decision, when it adjudged him to be offside when chasing a Blake Green kick into the in-goal.

The Sea Eagles were unlucky again when Akuila Uate touched down a Daly Cherry-Evans grubber, only for the Bunker to rule that he had knocked the ball on trying to touch it down.

But when Lewis Brown touched down for Manly on 62 minutes the referee this time awarded the try without consulting the Bunker and Matthew Wright added the goal to level the scores.

The Panthers took the lead again on 74 minutes when Tyrone Peachey touched down a kick that had rebounded off him, with the Bunker surprisingly deciding that the ball hadn’t touched his hand or arm before rebounding forward. Clearly’s goal put the Panthers 16-10 ahead.

When Uate knocked on a Cleary kick with two minutes remaining it created the opportunity for Cartwright to score his second try to secure victory. Cleary’s conversion was the icing on the Panthers’ cake.