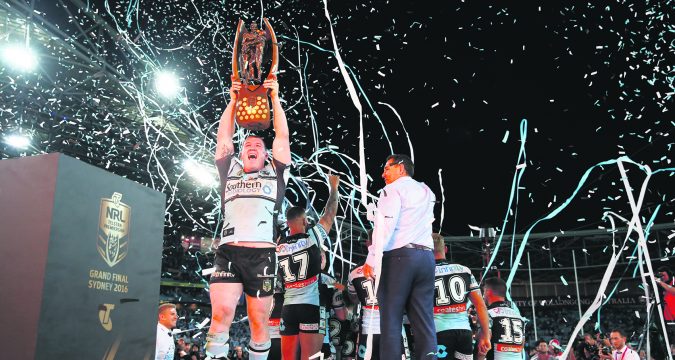 Cronulla Sharks forward, Paul Gallen will become the 29th player in NRL history to play 300 games when he takes to the field to face Brisbane Broncos on Friday night.

Playing alongside fellow veterans, Luke Lewis and Chris Heighington, Cronulla will be the first team in history to field three 300-game players in the same game when Gallen joins the action at Suncorp Stadium.

After the match, Gallen will be presented with the match ball to make him an official member of the exclusive ‘300 Club.’

Gallen debuted in 2001 for the Sharks and will become the 11th player to play 300 games for just the one club.

Now 35, Gallen is still playing at the top of his game, lifting the NRL Premiership trophy last year as captain when the Sharks beat Melbourne Storm in the Grand Final.

Gallen will remain a Shark in 2018 having signed a one-year contract extension last month with the defending Premiers.

NRL CEO Todd Greenberg said of Gallen, “Paul has been an incredible competitor for 17 seasons.”

“He is currently the longest-serving player in the game, and is one of our most decorated, having played 24 matches for NSW and 32 Tests for Australia.

“He deserved to captain a Premiership win in 2016, to add to his State of Origin series victory with NSW in 2014.

“On behalf of all Rugby League fans I congratulate him on this achievement.”