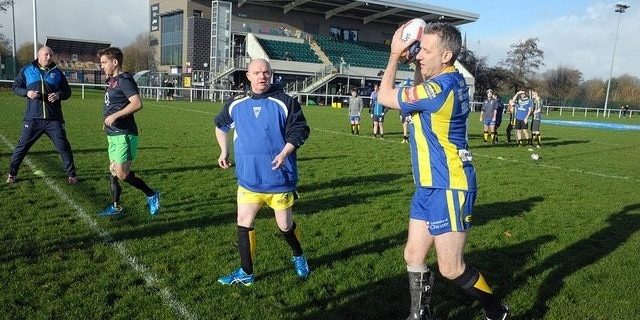 You may have never heard of Physical Disability Rugby League before – but that’s all about to change.

The latest form of rugby league is set for its first-ever fixture this weekend, when Leeds take on Warrington on Sunday at 1pm.

And if you’re in the area and decide to pop down – the entry fee is only a voluntary donation to PDRL – you may see one or two familiar faces from TV: as PDRL has some celebrity endorsement behind it.

“Adam Hills from The Last Leg (on Channel 4) will be playing for Warrington, and Alex Brooker will be involved for Leeds too,” explains John Welch, the man behind PDRL’s launch.

“We believe Johnny Vegas is trying to put a Saints team together, which will create some healthy rivalry! Our focus isn’t short-term though, it’s about a long-term view to get as many people as possible playing this game.

BREAKING: We’ve been working hard to get this one over the line. @RugbyLeeds PDRL team have signed @TheLastLeg co-star @alex_brooker

“Our athletes have been brought up on the game but have never been able to play it – now they have that chance. It’s so exciting for them.”

Hills is a big advocate of rugby league, and is also a lifelong supporter of NRL side South Sydney. Welch admits the involvement and endorsement from such high-profile celebrities will do wonders for the game’s launch in this country, as more and more clubs express an interest in setting up PDRL sides.

Right now, only Warrington and Leeds have teams – but that could change in the coming weeks.

“The backing we’ve had from the RFL has made it a little bit easier since we launched six months ago,” he said.

“We’ve got Warrington and Leeds on board at the minute, Wakefield have shown an interest and we’ve got a meeting this month with all the foundations at the clubs where we want to roll it out. It’s going to get bigger and better.”

And most importantly of all, it offers those with physical disabilities in this country the chance to play the sport they love: something they may not have been able to do in the past.

Welch added: “People just aren’t aware of the product. It’s never been something rugby has been able to offer. Football has excelled in disability sport for a while and rugby league is getting into it now. Hopefully it’s going to spike by the summer.

“Hopefully we’ll engage with the majority of clubs – but we’re not limiting it to clubs. For instance, if we can’t get something going in Whitehaven, then we’ll link them up with other clubs and areas close to them. It’s just about trying to increase the amount of people playing the game who haven’t had the avenue to do so before.”

And the plans aren’t just limited to domestic rugby, either.

He said: “We’re hoping to host a PD World Cup in 2021; there’s one in Australia this September and dependent on how quick we can get set up, we’re hoping to take an international team across to play Australia and New Zealand.”