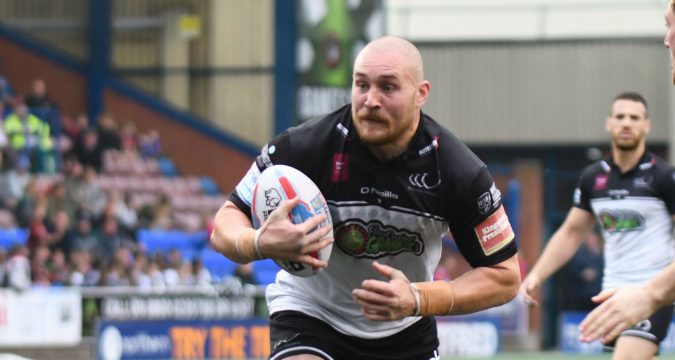 Widnes star Gil Dudson has called for players to be given more protection with regard to their contracts.

The Wales international is currently fight for the Vikings’ – and his own – future in the Qualifiers.

Current regulations mean a players’ contract becomes null and void if their club is relegated to the Championship.

Any Super League club that suffers relegation has the right to tear up existing contracts and renegotiate new deals, or not even offer new terms altogether.

It is a rule that has been heavily scrutinised after former Hull Kingston Rovers star Kevin Larroyer hit out at the current regulations earlier this year after revealing he had to fight depression after his contract was ripped up, just two days after moving into a new home he planned to pay off with his contract at the Robins.

It is a reality that players of all the Super League clubs participating in the Qualifiers must face. However, Dudson believes that needs to change.

“If you go down then your contract is done and I don’t think that’s right,” he said.

“If you look at the football you have the parachute payment system and you’re pretty much guaranteed that contract will be fulfilled. But in our game, it’s literally a Super League contract and if you lose that status it’s just gone and not even worth the paper that it’s written on. I don’t think that’s right and I think it should be looked at.

“When you sign a contract you bank on that money to get a mortgage and so on. But then you can turn around and the next thing you know you’re out on your own so to speak.

Despite his concerns over contracts, Dudson doesn’t necessarily believe the Super 8s concept is to blame.

“I think the concept is good,” Dudson said

“But I think the execution of it is a different matter altogether in the sense that there is no protection of players.

“On paper I think the concept is a good idea with the buy-in on everything for the fans and so on. It is exciting, isn’t it? It’s just the contract side of things that concerns me.”

For articles like this first ever week, buy League Express for the latest news, interviews and transfer stories. Buy online every Sunday evening at totalrl.com/le.