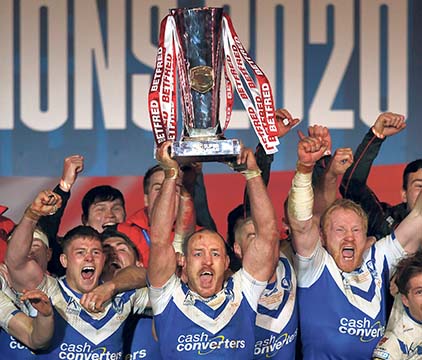 Down the years, coaches have drummed into players the need to keep going right until the bitter end, and just how relevant the old adage remains was highlighted by that amazing Grand Final finish.

Matchwinner Jack Welsby will never have to buy a drink in St Helens again – when the pubs reopen that is – but what on earth was Bevan French doing?

The Wigan fullback could have had a picnic and still dealt with the bouncing ball in the aftermath of the Tommy Makinson field-goal attempt which hit the bar.

Bevan is a brilliant player, but he switched off at a crucial moment, and I’m surprised none of the Sky pundits mentioned it. I’m sure it won’t have gone unnoticed by Wigan fans.

Fair play to Saints and Jack though, because he spotted an opportunity and went for it.

At that stage of the match, like all the players, he must have been cream-crackered, but he had the energy and spirit to give chase and put Wigan under pressure, and it paid off with a crucial try.

And fair play to Tommy, because without his excellent kick, the subsequent chance wouldn’t have been there.

Getting into the correct position then kicking field-goals isn’t easy, and going by this evidence, it’s something Tommy and his team-mates work on often during training.

Although Saints had the edge overall, I thought Wigan were the better team in the final 15 minutes.

But Saints kept going (back to my point about the full 80) and it paid off to provide that dramatic conclusion.

As for it being one of the greatest games going, as some have said, I’m not sure I’d go that far, and I think that because of the finish, people are brushing aside some of what went before.

It was certainly absorbing, and good if you’re a fan of what has become known as the ‘arm wrestle’.

Yes, defending is a key part of the game, but I also like to see flair and creativity, phases of play which really stretch the team not in possession, and those moments were too few and far between to make the match an all-time classic.

In a way, it put me in mind of that notorious 1985 Winfield Cup Grand Final when Steve Mortimer and his Canterbury-Bankstown team smothered St George.

I thought the outcome of the final reflected the season as a whole, because both sides were strong, but Saints just had the edge, and now their challenge is to make it three on the spin.

They clearly have a squad capable of doing it, while Wigan will have John Bateman on board as they try to prise the title back for the first time since 2018.

And one last point… or should it be two?

I think an explanation is needed over why there was no conversion attempt after Saints’ try.

The assumption is that given the hooter had gone, Saints declined a kick which would surely have been successful, but given that some punters will have backed them to win by four and some by six, it should be clarified.

What a superb programme about Rob Burrow Sky produced in the form of ‘The Magnificent Seven’, which was screened during the build-up to the Grand Final.

Soon after the awful news of Rob’s diagnosis with Motor Neurone Disease emerged almost a year ago, I called for the Super League title trophy to be named after him.

The powers that be allowed that opportunity to pass, which in my view was a major mistake, so now I say to Super League chief executive Robert Elstone – let’s create the Rob Burrow Magic Weekend.

We know the event is returning to Newcastle, in my view a sensible move, and is scheduled for May 29/30.

What a great opportunity to pay tribute to one of the greatest players of the Super League era, highlight his bravery in such a cruel situation and also to further publicise the need for funds to support research into MND – and to support the people and their families who are living with the condition.

Many other sports have been touched by MND, and I’ve read that it affects up to 5,000 people in the UK at any one time. Any case is one too many.

With Magic Weekend back in the sports-mad North-East, and with St James’ Park set to stage the opening match of the World Cup between England and Samoa, hopefully in front of a bumper crowd, what a great chance to publicise the plight of Rob and all his fellow MND sufferers.

Programmes like the Magnificent Seven and the BBC’s ‘My Year With MND’, which was shown before the Challenge Cup final at which Rob was the chief guest while watching from his own home, mean he is now known all over this country and beyond.

This has provided Rugby League, the sport at which he excelled, with the ability to provide a real boost to those who are living with MND and those who are working hard to find a cure.

Brett gets the nod

So Brett Hodgson is the new head coach of Hull – an interesting and perhaps slightly risky appointment.

The Aussie comes with a good reputation from his time working under Ivan Cleary, then Michael Maguire, at Wests Tigers, and he knows both Super League, having been a very good player for Huddersfield and Warrington, and Hull, where he had a spell as a coaching consultant before returning Down Under.

He certainly seems to have served his apprenticeship, and now we’ll see if he can cut it in the eyes of one of the game’s most passionate, and demanding, set of supporters.

There are two big questions as far as I’m concerned.

Will Brett change Hull’s style of play (to do that might also require some changes to the squad), and will Andy Last stay on the staff?

While it’s been stated he won’t be part of the first-team coaching set-up, it’s also been said that there will be an alternative position available to him.

As I’ve said a few times, that could all be a bit awkward, and it might be that he decides to look for a coaching job elsewhere.

Going back to style of play, I think it’s crucial that Hull move away from the previous emphasis on big forwards and big outside backs playing for yardage, then trying to score off the back of Marc Sneyd’s kicking game or hoping for a flash of inspiration from Jake Connor.

For the most part, it’s dull to watch, and if you look at Wigan, who in my eyes also play a pretty monotonous (if different) brand of football, while they might have had some success, the crowds (when they are allowed in) have gone down.

Yes, Hull won the Challenge Cup in 2016 and 2017, but they really need to be getting to a Grand Final, and just as importantly, their fans want to be entertained.