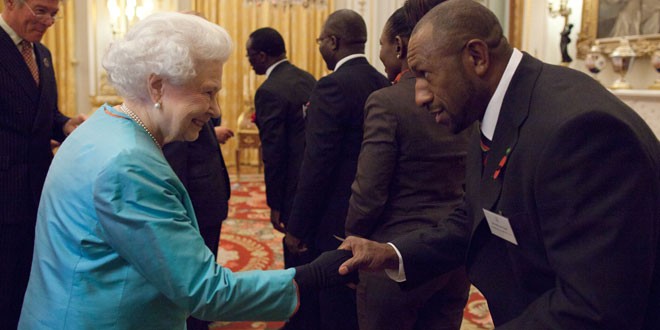 Ahead of his next match in Rugby League World Cup 2013, Papua New Guinea and Sheffield Eagles Rugby League star Menzie Yere, has received royal recognition for his outstanding work with the Kits2Kids Menzie Yere Foundation.
Menzie, was given special permission to leave the Papua New Guinea Rugby League World Cup team base, where the team are preparing ahead of Monday’s match against Samoa at Craven Park in Hull, to attend a Buckingham Palace reception hosted by The Queen to recognise his outstanding contribution in encouraging and developing sporting opportunities in Papua New Guinea.
The Kits2kids Menzie Yere Foundation has so far sent around 50 tons of sportswear from the UK to Papua New Guinea to enable local children to participate in a range of sports, including Rugby League – which is the national sport of Papua New Guinea.
Sheffield Eagles Director Chris Noble MBE, along with Simon Proctor and Keith Thompson from the club, supported Menzie in establishing the charity and the group have collected kits and equipment that are no longer needed by teams from a wide range of sources, including local teams in South Yorkshire and rugby festivals. They have even had parcels sent in from as far away as Australia to support the appeal. The kits and sporting equipment donated is collected and then shipped to the Rotary Club of Boroko in Papua New Guinea, who distribute it to be used by local schools and churches. So far three separate container loads of sports kit and equipment have been sent to Papua New Guinea and are being put to good use in local communities (as the pictures attached demonstrate).
Matthew Natusch, General Manager of the Papua New Guinea Rugby League team commented: “The whole Papua New Guinea World Cup squad were proud that Menzie’s outstanding work has received royal recognition.  His support for the development of sporting opportunities for all in Papua New Guinea has made a real difference to many people and he is held in the highest regard by not just the sporting community but the general public.”
Click here for information about how to donate any surplus sporting equipment to Kits 2 Kids