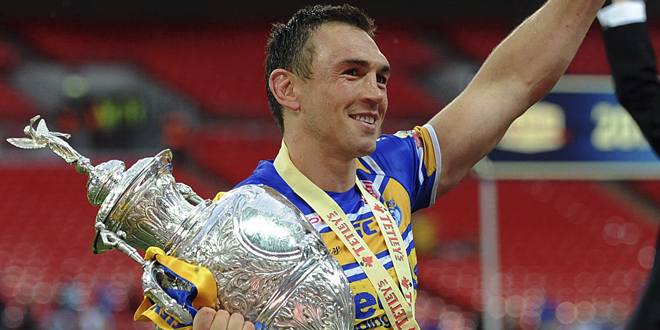 Castleford Tigers head coach Daryl Powell believes Kevin Sinfield will be a success in rugby union, but admitted he was surprised his former teammate had opted to make the code switch at the age of 34.

Powell appeared with Sinfield during the latter days of his career when Sinfield was still a teenager, and even went on to coach the former England captain during his spell in charge of the Rhinos. Incidentally, Powell is also the man who made Sinfield captain of the club in 2002, a role he has held ever since.

And, when quizzed about whether he thought Sinfield could crack the 15-man code, Powell says that although it will be a challenge, he has the tools to be able to succeed.

He said: “It surprised me a little bit, but then I know he’s thought about doing it at some point in his career. Obviously everyone has their own reasons for doing it, and it’ll be interesting to see if he can make a success of it.

“He’s been such an outstanding character for Leeds and for the sport though that you wouldn’t back against him to do it. He’s been unbelievable throughout his career.

“He knows what he’s doing, I’m sure he’ll have done all his homework – but it is a challenge. Look at the big names who’ve crossed; it’s tough. You’ve got a big target on your head and it’s a tough sport, completely different to what he’s used to playing.”

Powell also said that he can see parallels between Sinfield and Liam Sutcliffe – the man who is expected to fill Sinfield’s role when he heads to Yorkshire Carnegie at the end of the season. The Tigers may have to deal with both men on Good Friday, after they were both named in Leeds’ 19-man squad for the game against Cas.

“It’ll be interesting to see what they do; young Sutcliffe has slotted in there and done a good job,” said Powell. “They must feel like they’ve got someone who can take his place, and Sutcliffe looks like a mature young man who could handle the pressure in a similar way to what Kevin could at that age.”