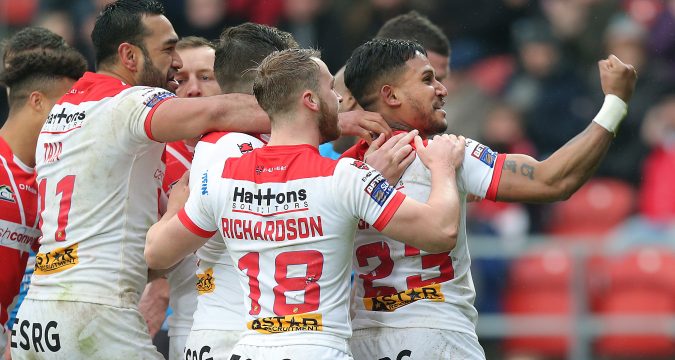 With last week’s table-toppers, London, not playing, there’s a new side on top – and who else could it be but the all-conquering Saints? They made it four wins from four on Sunday with another dominant victory, this time against Salford Red Devils.

Another climber this week are Super League’s other remaining unbeaten side, Wakefield Trinity. They made it four wins from four with a hard-earned victory over West Yorkshire rivals Huddersfield.

The Broncos drop two places this week – but only because their game at Sheffield fell victim to the wintry weather sweeping across the country. They return to action on Sunday against Batley Bulldogs.

Sylvain Houles’ side are on the rise – and they’re now top of the Championship following their heavy victory over Rochdale on Saturday afternoon. Can they stay there?

John Duffy’s Rovers climb three places in this week’s rankings following their seriously impressive victory at Leigh on Sunday. Now with four wins from their opening five games, can the Rovers mount a top-four challenge again in 2018?

The second of our new entrants this week is Toronto Wolfpack, who return to the top 10 following a return to winning ways at the weekend, following their victory at Swinton Lions.

Shaun Wane’s Warriors got back on the winning trail at the weekend with a strong performance to see off Widnes Vikings on Friday evening – and they find themselves third in the embryonic Super League table.

Hull are the fourth and final team to return to the rankings this week, after their win over Warrington on Friday night.

No game for League 1 side Oldham last weekend – and they fall a place in the rankings down to ninth.

It wasn’t the best result for Widnes on Friday night, and they slip four places in our rankings this week after defeat to Wigan.