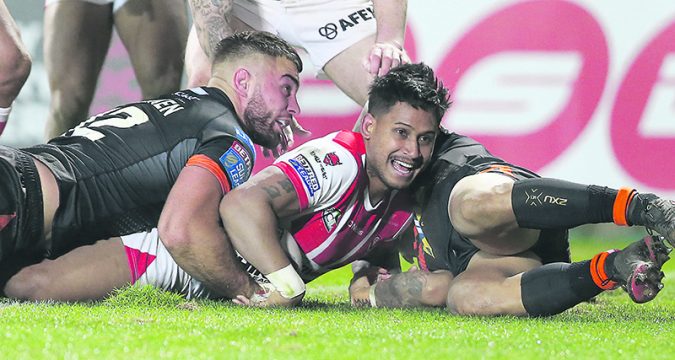 The first Power Rankings of 2018 are here! Following the opening round of the Super League and Championship seasons, here are the sides we think caught the eye the most.

It’s fair to say all the talk of being title favourites didn’t weigh too heavily on St Helens’ shoulders on the opening weekend. Justin Holbrook’s side blitzed their way to the top of Super League with the biggest win of the opening weekend in both divisions, destroying last year’s Grand Finalists, Castleford. A sign of things to come?

It was some statement of intent from Paul Rowley’s side on Sunday at Leigh Sports Village. The Wolfpack have had a turbulent off-season to say the least, but they made light work of Leigh Centurions in the second half of the weekend’s blockbuster tie in the Championship to lay down an early marker to the rest.

Widnes’ big win over Catalans was perhaps one of the surprise results of the opening weekend. The Vikings have been tipped to struggle again this season, but they blew the Dragons away in the second half of Sunday’s 40-12 win at the Halton Stadium.

They’re top of the Championship after the opening round, and London started life under Danny Ward with somewhat of a bang on Sunday. They dispatched newly-promoted Barrow with ease to sit atop of the pile after the first weekend of the new season: are they realistic top-four contenders again in 2018? Trinity were certainly favourites heading across the M62 to newly-promoted Hull KR on Friday night, but they handled that expectation well, emerging comfortable winners to start their season with a win. Can Chris Chester’s side go one step further in 2018?

The Rhinos edged home in the first match of the new season, winning a thriller at Warrington. With their new-look half-back pairing in Richie Myler and Joel Moon catching the eye and Jack Walker once again looking like a star, should the Rhinos be confident of retaining their title?

After a disappointing end to 2017, the Warriors quickly put that behind them with a thumping win at Salford. The spine of Sam Tomkins, Morgan Escare and George Williams all caught the eye ahead of Wigan’s trip Down Under this weekend. Sunday was a big day for top-four chasing Featherstone and Halifax – and it was Rovers who came out on top with a big win at the LD Nutrition Stadium in front of a bumper crowd. Half-backs Martyn Ridyard and Tom Holmes looked in imperious form ahead of another big clash for John Duffy’s side: Toulouse at home this Sunday.

Speaking of Toulouse, they roared their way into the top-three after the opening round of the Championship season with a comfortable victory over Swinton Lions.

Our first Power Rankings of the season are completed by Hull FC, who, despite a shaky start against Huddersfield, recovered well to run out victorious against Rick Stone’s Giants.