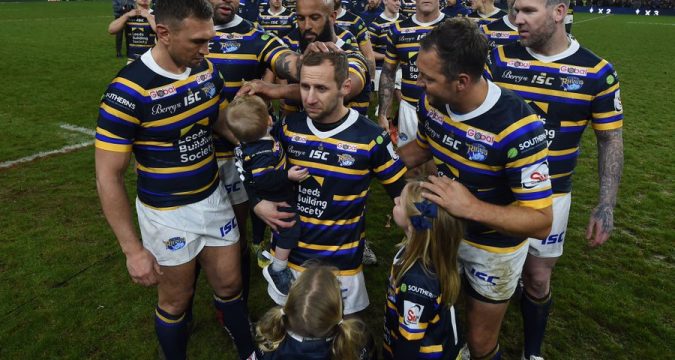 It’s been a busy weekend across Rugby League with 13 pre-season friendlies, including three testimonials, taking place…

Leeds sealed a dominant win over Bradford in an unforgettable occasion at a sold-out Headingley.

Despite being without Luke Gale, who picked up a leg injury earlier this week, Leeds got off to a fantastic start. Cameron Smith’s late offload, with three Bradford defenders involved in the tackle, to Dwyer kept an early Rhinos move alive and Dwyer bounced off a tackle to set up Rhyse Martin for the opener. Martin converted his own score, giving the Rhinos an early 6-0 advantage. Martin was in again moments later, after an inside ball from Harry Newman gave him enough time and space to cross. However, Martin’s second conversion attempt fell short, leaving the score 10-0 in the favour of the Rhinos after just 12 minutes.

After a further 15 minutes of see-saw action, with both sides trading sets, Bradford found their way across the line. A superb move, following a series of passes, was finished by Ross Oakes. Lilley’s conversion was wide, leaving the score at 10-4.

Shortly after, Harry Newman’s pass after his break down the right flank was knocked on by Bradford. The loose ball was then picked up and dotted down by Liam Sutcliffe, awarding the Rhinos a 2-score lead. Leeds’ attacking prowess prevailed just one minute later, with Konrad Hurrell’s late offload leaving enough space for Jack Walker to break through the Bulls’ defence, who later provides the finishing pass to Brad Dwyer. Both sides went into the sheds with the Rhinos holding a 22-4 lead.

After the break, it was the visitors that crashed over first. Thomas Doyle scampered from dummy half and jinked his way over in front of a energetic Bradford crowd. Jordan Lilley added the simple conversion, providing the Bulls with a way back in this contest.

As you can expect, tempers did begin to flare between the two bitter rivals, with both sides applying some massive shots on their opposition. Around the 60-minute mark, Mik Oledzki earnt his side a penalty close to the Bulls line and eventually, the Rhinos attack paid dividends, with youngster Callum McLelland crashing over for the latest try.

A huge shot from McLelland caused a Bradford knock-on and the loose ball is pounced on by Richie Myler, who goes untouched towards the try line and adds to Leeds’ impressive afternoon. Rhyse Martin surprised us all with a conversion from the touchline to establish a 4-score lead.

On the 75th minute, Rob Burrow was heavily applauded onto the Emerald Headingley turf by the sell-out crowd, which brought Burrow, and many spectators, to tears.

Rob Burrow was treated to a standing ovation by a sold-out Headingley as he ran onto the field for the final time as a player.

The Rhinos legend could not hold back the tears as he was welcomed by former team-mates from Leeds’ golden era: https://t.co/EudCa6B7s9 pic.twitter.com/cHMQlxRWlw

An emotional and memorable afternoon saw Leeds come out victorious but this game will not be remembered for its scoreline. Instead, it will be remembered as a fixture which has celebrated two of Rugby League’s greats and has also made the Rugby League community closer than ever.

The Red Devils started strong and after being held up once, Joey Lussick eventually got over to score the opening try. However, Salford’s error immediately after from kick-off, along with a penalty, allowed Leigh to reply almost immediately, with Liam Hood crossing over for John Duffy’s side and Ben Reynolds adding the extras.

Momentum quickly went back into Salford’s favour and, after back-to-back penalties, two new signings linked up as Kevin Brown played in Rhys Williams on the left-edge. The Devils continued their red-hot scoring form and darted their way over the line twice in the final eight minutes of the half. First, Brown’s spiral pass to Ken Sio allowed him to stroll over and in the final play of the half, Greenwood crossed in front of the posts, with Lolohea adding an easy conversion.

Leigh did turn the tables early on with tries being provided by Junior S’au, against his former club, and Brad Holroyd but neither try was converted, which left Leigh with a 8-point deficit. Salford scored a potential game-winner on the 66th minute as Rhys Williams crossed for his second, with regular kicker Inu converting from out wide. Nick Glohe, in his debut for Leigh, played a substantial 73 minutes before being interchanged and hence, received a high amount of praise from Leythers who made the journey down the East Lancs.

Salford’s Super League stature reigned supreme in the closing moments, with Ian Watson’s side crossing twice in the final two minutes. Josh Johnson and Ed Chamberlin got on the scoresheet, with Krisnan Inu adding both conversions, giving Salford a considerable 40-14 victory.

Things started badly for Rovers, with Mose Masoe being forced off the field on a stretcher after just three minutes. They did look to score an opener through Ben Crooks, only for the touch judge to rule a forward pass during the build-up.

Trinity finally broke the deadlock after 25 minutes as Titus Gwaze set up Ryan Hampshire, who saw a gap in the line and dummied his way over. Brough kicked the conversion. There were no further scores in the opening 40, meaning Wakefield went into the changing room with a 6-0 lead.

Ryan Hampshire played his part in the first score after the break by providing a stunning pass to Tom Johnstone, finishing athletically on his return after a lengthy injury. Then, inventive half-back Brough slid in a delicate grubber, which was collected and grounded by Kyle Wood, giving Trinity a three-score advantage.

Hull KR did eventually get a look-in at the Mobile Rocket Stadium as Ethan Ryan scored out-wide, with Ryan Brierley converting, but this was the only score from the visitors. Wakefield did face concerns late-on after Max Jowitt was interchanged due to a knee injury.

Sezer impresses on his debut as the Giants overpower Halifax.

It didn’t take long for the Giants to open the scoring, with Jordan Turner crossing after just two minutes. Sezer, recently named 2020 captain, secured his first points for his new club with a successful conversion. The half-back, signed from Canberra, was instrumental in the Giants’ second score as he set up Jordan Turner for his second.

New recruit Ashton Golding was next to score after an impressive effort, which ended with him stretching over to score. Jerry McGilvary, in his testimonial fixture, got on the scoresheet quickly after and the Giants looked unstoppable, scoring at a rate of a point per minute. Sezer also showing his class, kicking every goal.

Halifax had to wait until the second half to open their account, where new signing Jodie Broughton, who signed from Catalan in the off-season, beats everyone to grounding the ball.

This didn’t halt Huddersfield’s attack, with the Giants scoring a further three times before the full-time hooter. 20-year-old Owen Trout got his name on the board, while Jordan Paga, 19, outstepped Halifax’s defence. Darnell McIntosh scored on the penultimate minute, ending a superb afternoon for the Giants.

A strong Vikings side recorded a 32-10 victory over a youthful Castleford outfit.

After a Castleford knock-on from kick-off, Widnes navigated their way over after just one minute via Jake Spedding. The Vikings later extended their lead through Dean Cross. Castleford replied, with Lewis Carr finding enough room to touchdown. After being earlier held up, Pat Moran managed to find his way over.

Widnes scored two tries early on, giving them breathing room, as Lloyd Roby and Jack Johnson prevent any potential comeback. The Tigers did get one score back, with Lewis Carr scoring his second, but this was quickly eradicated by Ted Chapelhow.

Hull’s first-half performances are enough to secure a 20-6 over former Super League side London Broncos.

Hull FC Winger Ratu Naulago scored the inaugural try in this fixture after just three minutes but this was quickly cancelled out by London’s Sadiq Adebiyi. Kieran Dixon’s conversion edged the Broncos into an early lead. Hull dominated the remainder of the half with scores from new recruit Ligi Sao, Eldon Myers and Naulago.

An experience was given to younger players, such as Ben McNamara and Charlie Patterson-Lund, from Hull FC coach Lee Radford in the second half but neither side was able to score, leaving Hull with a 20-6 victory.

The Hornets stormed into a solid half-time lead of 14-points after scores from Lewis Sheridan, Sam Freeman and Andy Lea.

Oldham managed to get first blood in the second half, with David Hewitt’s effort being converted by former Hornet Dan Abram, who then later scored and converted to leave a 2-point gap. Luke Fowden scored a match-winner for Rochdale on the 67th minute as the Hornets managed to hold on to an 18-12 victory.

Featherstone scored a century as they became Valencia’s first-ever opposition.

It didn’t take long for Rovers to dominate the game and, after tries from Jake Sweeting, Sam Ottewell, Gareth Gale, Josh Hardcastle and Nathan Wright, alongside a plethora of conversions from Jouffret, Featherstone held a commendable 4-42 lead at the break.

Barrow hold to beat North Wales, despite a late comeback

On the third time of asking, Barrow crashed over in the form of Ryan Duffy. North Wales equalised through Elliott Jenkins, despite claims of a forward pass from the home supporters, but could not convert his own score. The Raiders hit back with three tries without reply, from Dan Toal, Tee Ritson and Joe Crarey.

North Wales finished the match with two tries, through Jordan Gibson and Jack Holmes, but it was a case of too little too late.

Coventry began their pre-season on Friday night with a 22-14 victory at Butts Park Arena.

The Broncos began to stage a fightback by scoring three tries without reply, from Tom Firth, Charles Hammond and Joel Fosuhene-Gray, limiting the Bears’ lead to a mere two points. Moments later, Cullimore broke the line to score a match-winner, and Clavering added his third conversion of the night.

Newcastle defeated Whitehaven 40-16 on a windy day in the North East.

After 20 minutes, the scores were level at 10-10. Haven’s scores came through captain Marc Shackley and David Thompson, while Thunder’s efforts came in the form of Alex Clegg and Ashley Gibson. Prior to half-time, Newcastle established a 12-point lead after tries from Adam Lawton, formerly of Salford, and Lewis Young.

Thunder continued their spell in the second half and, other than a score from Haven’s Dion Aiye, kept their visitors scoreless. Newcastle’s second-half scores were provided by Reece Dean, Brad Walker and Lewis Young.

The Rams ran rampant in the opening 25, taking an 18-point lead, after tries from Dom Speakman, Adam Ryder and Liam Johnson. Keighley did crawl two tries back shortly after, with two new recruits, Taylor Prell and Jake Webster, crossing.

Keighley’s score through Louis Sheriff was quickly cancelled out by Dewsbury’s Dom Speakman, over his for his second, giving the Rams an 8-point advantage with just seven minutes remaining, but this game was far from over as the Cougars crossed twice in the final two minutes, in the form of Mo Agoro and a racing effort from Jason Muranka, to seal a narrow 26-24 victory.

Hunslet’s second-half performance earned them a win over Batley.

Batley’s major signing Shaun Lunt was involved early, providing an assist to George Senior, but Hunslet quickly equalised through Liam Copland, leaving the half-time score at 4-6 in favour of Batley.

Tyler Dickinson scored under the posts after the break, making the conversion easy for Dale Morton. However, Batley ended up with a 16-12 defeat, as Hunslet darted their way over the line twice without reply.