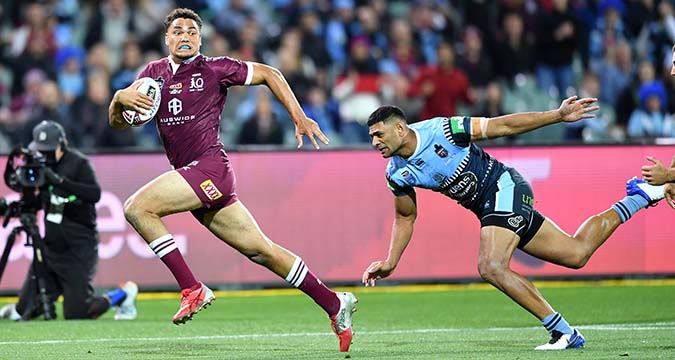 Queensland came from 10-0 down at half-time to win game one of State of Origin, 18-14 against New South Wales.

Two tries for the Blues handed them a deserved lead at the break but three four-pointers for the Maroons saw Queensland in control and a consolation for New South Wales came just too late in Adelaide.

After a wobbly start, with Damien Cook dropping the kick off, New South Wales gained the ascendancy going close through Josh Addo-Carr early before Queensland’s Daly Cherry-Evans missed the chance to hand his side the lead with a penalty.

New South Wales, instead, took the lead thanks to Cook’s opener which was followed swiftly by Addo-Carr’s effort in the right corner which saw the Blues lead 10-0 at the interval.

Queensland started the second half well and deservedly pulled a try back when Kurt Capewell broke and kicked for the supporting AJ Brimson.

Then two minutes later, Dane Gagai broke and timed his pass perfectly to winger Xavier Coates (pictured) as the Maroons took the lead thanks to Cherry-Evans’ touchline conversion.

More pressure came from Queensland and a poor offload from Daniel Tupou and the Blues was toed ahead by Cameron Munster and he had the pace and strength to hold off Cook to score a third Maroons try of the half.

The Blues got back within a score with four minutes to play when Addo-Carr crossed on the right for his second try of the game but in the end, the Maroons held on despite Felise Kaufusi’s late sin bin for a professional foul.