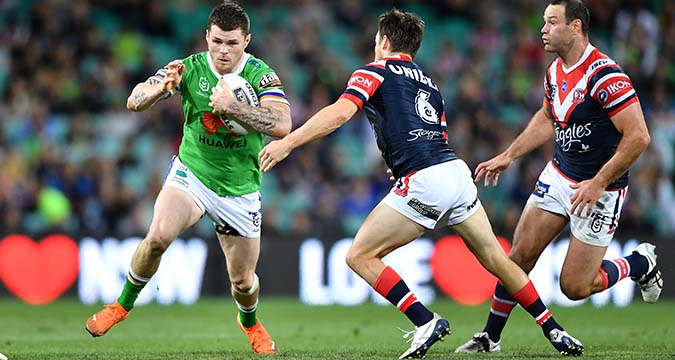 Canberra Raiders held off a strong fightback from reigning Premiers Sydney Roosters to knock them out of the running for the Premiership and book themselves a place in the Preliminary Final against Melbourne Storm with a 22-18 win.

The Raiders led 16-0 after 23 minutes but the Roosters closed the gap to four on two occasions but fell just short as Canberra avenged their Grand Final defeat 12 months ago.

Canberra opened up their big lead within 23 minutes. Josh Papalii barged over before a break from Charnze Nicoll-Klokstad saw George Williams dive over despite smacking off the upright. Then Joseph Tapine’s brilliant individual run gave the visitors their third try.

The Roosters were able to respond before the break. Josh Morris broke down the left and kicked well in field for James Tedesco.

A try for Joseph Manu reduces the gap further before a slip from Tedesco saw Jack Wighton ground Williams’ kick.

Tedesco’s second set up a grand stand finish but the Raiders held on.

Full match reports of both this weekend’s NRL games will feature in Monday’s League Express.