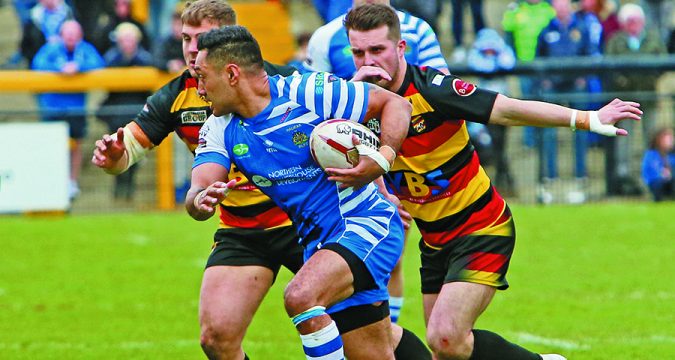 TWO teams whose early season stars continued to rise last weekend were Dewsbury Rams and Coventry Bears.
In the Championship, the Rams were tipped by many to struggle under Lee Greenwood this year, not least because they lost a number of established players, and the new coach admitted that some he had brought in may not be up to this level.
Some arrived from the amateur game, others having been released elsewhere. But Sunday’s 20-20 draw at Barrow Raiders was the latest indication that Greenwood’s team are not willing to make up the numbers this season.
In fact, they could have won all three matches to date, having allowed a 16-point lead to slip against York – who have been so impressive elsewhere – in their opening match, before then accounting for Swinton Lions.
On Sunday they were six points ahead at Barrow, where not many teams have prospered in recent years, before the home side levelled matters late on.
Greenwood has openly admitted there is still much to come from the Rams, so a three-point return from their opening three matches is a very solid starting point.
With experienced halves Paul Sykes and Simon Brown steering them around the field, they should not be underestimated.
Meanwhile 200 miles south in Coventry, the Bears were producing one of the results of the season so far by beating hugely fancied Newcastle Thunder 32-28 – their second straight win of the campaign so far.
Tom Tsang’s side beat both Keighley and Hunslet last year, but their coach was unequivocal about how significant defeating a team including the likes of Liam Finn, Misi Taulapapa and Alex Rowe was.
Tsang said after the game: “A lot of hard work has gone into that and for me – having been here for eight years and seen how we’ve built – that’s the highest high we’ve had.
“Newcastle are obviously tipped to be in the top two this year, and for the boys to just give them no respect and rip into them from the first minute is exactly what we’ve been asking for.”
This weekend the Bears take part in one of the most attractive fixtures in all three leagues when the relaunch of Keighley comes to Cougar Park for the first time in a competitive game.
Two clubs who know what it’s like to do it tough – in different circumstances – will take to the field with much to be optimistic about for the future.
It should be a cracker.