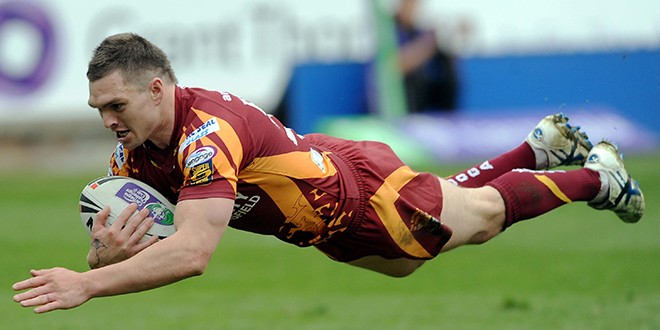 Player of the Year: There’s only one choice here, and it has to be Danny Brough who led Huddersfield to the League Leaders’ Shield. Individually he was absolutely superb in all departments and he chipped in with important tries, which is something he doesn’t get much credit for. He won the Albert Goldthorpe Medal and the Man of Steel and had an outstanding World Cup with Scotland.

Young Player of the Year: Liam Sutcliffe of the Leeds Rhinos was outstanding when he got the opportunity and he should have a great career. He didn’t shirk the responsibility of being an organiser and it’s no surprise Leeds gave him a long contract. I think loose forward will be his position, but he was also great at stand-off.

Mature Player of the Year: Mickey Higham continues to stand out and I thought he was unlucky to miss out on a place in the England World Cup squad. He’s consistent and he just kept Warrington ticking over with his vision and prompting. He won the Warrington player of the year, which says a lot.

Best Newcomer in 2013: This has to be Alex Walmsley without a shadow of a doubt. For a young prop to get the better of so many big-name players was a great achievement. He stood out when Saints were so poor for much of the year, and I think he was very unlucky to miss out on an England place.

Player who will be most missed in 2014: Each of the five listed will be missed in their own way but I think Michael Dobson will be missed the most, not because he was the best player on the list but because Hull KR relied on him so much. I suspect Sam Tomkins will win this category, but he was below his best or injured for much of 2013.

Best Super League signing for 2014: Matty Russell was a great prospect at Wigan and I’m really excited to seeing him come back into the competition after a spell at Gold Coast. He was outstanding in the World Cup for Scotland and I’m sure we’ll see him score loads of great tries for the Wire, as he’s sheer quality

Coach of the Year: In September I plumped for Paul Anderson on the basis of Huddersfield’s regular season heroics, but if you throw in the Challenge Cup and the play-offs, which weren’t included then, I’d have to go for Shaun Wane, who did an amazing job at Wigan, winning them the two big trophies.

Club Captain of the Year: Sean O’Loughlin was missed by Wigan when he was out of the side, and when he played he showed what he was worth to them. His individual game gets better and better, but it is as a leader that he is best, and he is the best captain in Super League.

Club of the year: Wigan. We all thought they’d miss Tommy Leuluai and Brett Finch, but they didn’t. Not only did they win the two trophies but they did so with a really attractive style of play. Their youth system is still the envy of most, as is their off-field operation.

Player of the Year: Paul Cooke is still a great player who can control a game with his eyes shut. Despite playing for a team that was never realistically going to win the competition, Cooke ensured that Doncaster were always competitive and they ended up having a great campaign.

Coach of the Year: Again, Doncaster’s over-achievement is hard to ignore and I’ll go for Tony Miller as the competition’s best coach. It’ll be interesting to see how they go next year without him, because he’s done a great job over a long period of time there.

Player of the Year: I have to confess that I have not watched too much of this competition this year, but for his part in helping establish a new club, I’ll plump for Tyla Hepi who, when I have seen him, seems to be a very good player and he was good enough to be recalled into Hull KR’s Super League team this year.

Coach of the Year: Being in charge of a struggling club isn’t easy and Oldham have done it really tough in recent times. Nonetheless, Scott Naylor managed to turn things around and guide them back almost into the Championship just falling at the final hurdle, and he deserves a lot of credit for that.

Best Match: England v New Zealand had absolutely everything. It was heartbreaking for England but it was an incredible match with everybody watching from the edge of their seats. I still haven’t recovered from the Kiwis’ final match winning try.

Best Player: Johnathan Thurston stands out here as he had an incredible tournament. He doesn’t let his standards drop and seems to deliver a nine-out-of-ten performance whether they’re playing an easybeat team or New Zealand in the final.

Most Exciting Player: Sam Burgess is just a joy to watch these days. He’s got the ball skills of an old-fashioned forward, which most in the Super League haven’t had. His performance in the semi-final against New Zealand was absolutely amazing, as good as I’ve seen for years.