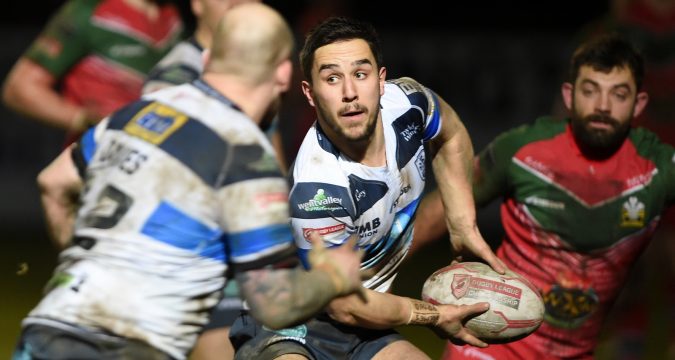 The 22-year-old has caught the eye since leaving Castleford ahead of the current season, with the Red Devils keen to land the former Tigers star.

But they face competition from Featherstone, who have offered Holmes a new two-year deal to stay with the club.

Holmes had offers to remain in Super League this season, but decided to drop down to the Championship in order to get regular game time, a choice which has proved fruitful.

He has been an ever-present for John Duffy’s side this season, scoring five tries in 17 appearances.

His performances have garnered attention from Ian Watson, who is looking to add depth to his small squad ahead of 2019.

Salford have Rob Lui and Jack Littlejohn in the halfbacks, with the ever-improving Josh Wood another option in that position.

But the Red Devils are keen to add further options in their creative department, with Holmes among the players that they’re considering a move for ahead of next season.

Holmes made his professional debut with Castleford as a 19-year-old and went on to make 20 appearances for the club, including twelve in last year’s League Leaders’ Shield winning side.

But the form of Luke Gale and Ben Roberts, plus the emergence of Jake Trueman, meant his opportunities were likely to be limited, prompting him to make the move to the Rovers.

Salford are already actively pursuing a number of other potential signings for 2019, with Mason Caton-Brown another of their targets.