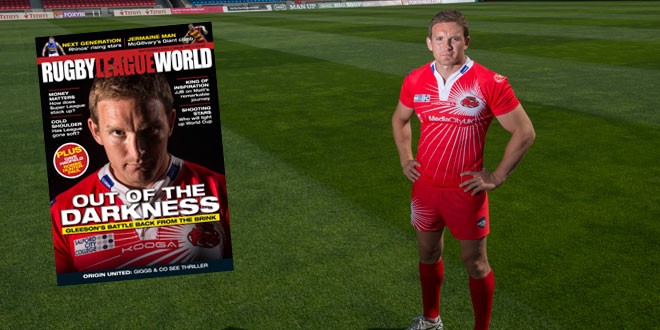 “I just disappeared basically. I didn’t speak to any of my mates; people didn’t see me for months on end. Nobody saw me really. I don’t think I saw myself.”

Martin Gleeson has been to some dark places over the last couple of years. Some very dark places. But now, as he sits looking out on his current home ground in Salford, he seems more at ease with himself and his lot than at any stage of his colourful career. By his own admission, this is a different Martin Gleeson.
The former Great Britain centre, who has played for five of Super League’s current top eight clubs, spent much of last year wrestling with the demons of severe depression, the legacy of his controversial 18-month suspension for testing positive for a banned substance while at Hull FC. Gleeson didn’t leave his house for weeks on end. When he did, he would disappear for days and weeks at a time, uncontactable to even his own mother, or his closest friends, such as Sean Long.
It was the culmination of a shocking sequence of events that looked to have left his playing days in tatters. Newspaper reports in early 2011 suggested he had received death threats after being caught up in a blackmail plot, he was convicted for drink driving, and sent home from training at Wigan for being in an unfit condition. A potential move to Australia, to escape the turmoil, fell through, but when an opportunity arose at Hull FC, Gleeson headed east with the intentions of making a fresh start.
Then his world fell apart again. Just seven games into his Hull FC career, Gleeson tested positive for the banned stimulant methylhexaneamine, after taking a supplement that was cleared as safe to use by the club. Conditioning coach Ben Cooper and chief executive James Rule were also handed lengthy bans by UK Anti-Doping, in a landmark case that Gleeson is still currently pursuing.
The ramifications of his own 18-month suspension ran much deeper than an extended spell out of the sport.
“It was tough, it was hard,” he tells Rugby League World, clearly moved by the memory. “From when it first happened my world just spiraled and went into freefall. Depression hit pretty hard actually, and I just didn’t speak to anyone. I didn’t answer my phone; I turned it off for weeks at a time. I didn’t leave my house, didn’t open my post for months. It was bad.
“It’s when it shocks you – when you don’t know that you’ve done anything wrong. It came out of the blue and I didn’t expect it. Then after, I didn’t expect what happened with the club. I felt like I’d been led down the wrong path, and it took me a while to get over that.

“I was living on my own. I just went away. I didn’t even speak to my family. I went on a few holidays, just disappeared basically. I didn’t speak to any of my mates; people didn’t see me for months on end. Nobody saw me really. I don’t think I saw myself.
“It was tough, and I just sort of felt – that was it. I probably didn’t help myself – I didn’t listen to people, I just blanked everybody and everything around me.
“After the Grand Final 2010 things went downhill for me. Things happened on and off the field at Wigan that were reported in a couple of papers about me and my family. That affected me personally with stress, and affected my home life. A few things went wrong all at once – I got done for drink driving, I tried to go away and then that happened at Hull, and it felt like the end of the world really.
“I thought things couldn’t get any worse than they had done. I was supposed to be going over to Australia to play there, because I’d had a lot of trouble in Wigan. That was the reason I left Wigan, there was a lot of trouble, and I felt I needed to get as far as possible away from the stuff that was happening to me off the field.
“Australia was an option that didn’t quite come off for me and it was probably going to be the end of the year before I could get there, so I went to Hull as another option and wanted to start afresh there. I wanted to start a new life over that end, but a few games in you realise you’ve failed a drugs test for a supplement that was already at the club and that lads had been taking for months before.
“It was just the conditioner’s mistake – he’d checked it out and got it wrong. I was like ‘bloody hell, how unlucky am I?’ When you train at any club, when you come in all your supplements are there or in your locker and you just take them. Guys are there to do a job, but this one didn’t. A mistake was made, someone had to pay for it and I did.”
Eventually it the support of his close family and friends that pulled him from the abyss.
“I wasn’t speaking to anyone, was drinking a lot and put on a lot of weight,” he recalls. “I was in terrible shape. I just looked at myself in the mirror, and one day it just clicked and I thought ‘what are you doing?’
“My close family got me through that, but I had to hit rock bottom before climbing out of there. I think I have come out a miles stronger and better person.
“My family told me I had a chance to play again, I was only 32, people play for a lot longer these days, and there were a few good comments from friends, people like Moz (Adrian Morley) in the papers. I never read any papers or anything to do with rugby for ages, but when you start coming out of it people were great.”

Out of the darkness

Another turning point arrived in the shape of Karl Long, whose company helped turn an overweight and out of condition Gleeson into the best shape of his career.
“When I was off I took a good few months before pre-season started to get myself like that, and I have to thank my friends at Torque Sport Nutrition who gave me all the programmes to do and got me all the right supplements. When pre-season came I was already flying and that’s already paying dividends. Having those 18 months off not being bashed about will probably prolong my career.
“Karl said he’d help get me fit, and one day, boom it just clicked. You start your recovery, and it’s hard when you’ve not done anything for a while. But you start training the house down, your ban time starts coming closer and closer.
“You think if you do good things then good things happen, and I’ve done a lot of good things over the last couple of years, to get myself the way I am. I’ve changed my whole lifestyle and diet, and I think all that’s paying off now.
“I feel like a different person. To come out of that, it’s like ‘wow – this is unbelievable’. Everything seems so rosy – I’ve got a new family now, a five-month old baby, a new missus. But in a way I’m glad it all happened because I’ve never felt like this in my life. It’s happened to me for a reason, and being here now with the Doctor (Salford chairman Marwan Koukash), and his ambitions for the club, I’m thinking there’s a chance for me to do something else here before my career finishes.
“People play a lot longer than they used to now, and I’ve only just turned 33. I can play for a good few years more now, and if we can get somewhere in the next few years, that will be my biggest achievement.”
The move to Salford has further re-invigorated him, despite the clouds of uncertainty that surrounded the club when he first arrived. He admits that period was difficult for all the players – but nothing in comparison to what he had already come through.
“Being back playing for Salford, even though it’s been rocky, I’ve loved every minute of it. Every day’s been a new challenge and really exciting. It’s been tough and not what I’ve been used to, but to get a chance like this again feels like a new life for me. I’ve really enjoyed the challenge of it.
“At the beginning of the year, because I did have a couple of options, I did wonder if I’d made the wrong decision here. But then when the Doc came in and saved the day for Salford it felt like karma – if you do good things then good things happen to you. I could see that there was a future here, and I could finish off with a club that is really going places.”

Widely been considered to be the most talented English centre of his generation, having represented his country extensively and won Super League titles and Challenge Cups as well as being caught up in one of the biggest controversies of the Super League era when he and Sean Long were banned for betting against their own team, Gleeson has had a career like no other.
“I’ve had a lot of good stuff. I started at a bottom team in Huddersfield but that gave me my first chance in the first team at 19, and then I got snapped up at St Helens. I was in a really successful team there – we won trophies in the first year and I was straight into the Great Britain team. We had a lot of fun back then, on the field and off the field. I went to Warrington then, and we didn’t quite get to a final – the success happened there after I left! Then there was Wigan, and I won Super League with them.
“There was the gambling thing, but that was just stupidity. It wasn’t a match fixing thing – it was just that we knew what our team would be and the bookies didn’t. We deserved what we got for that, but there was no malice in that, it was just sheer stupidity on our case. They’re life experiences, and I’ve got a lot of those, good and bad. I’ve done a lot of good things in the game as well – represented my country a lot of times and played in some really big games. I’ll take the good with the bad, and I think I’ve come out of it all a better person.”
Now he wants to finish his playing career on a high – he speaks of making a Grand Final with Salford – before hopefully staying in the game, as “rugby is the only thing I know”. Given his remarkable experiences, he should have a huge amount to offer.
“When you get knocked down you have to get back up again, and I’ve had to get back up a couple of times,” he adds. “This last time I really had to get up – I was under the floor, not on it. I think I’ve got up now, I’m standing tall, and I think the next few years are going to be good.
“When I was at my lowest, my best mates – Longy – couldn’t get hold of me for weeks and weeks in a row. I’d just be off somewhere. I’d speak to my mum weeks later and she’d be like ‘where have you been?’ You’re in denial for a lot of it, and I was in denial for ages.
“I’m miles better now, but looking back, it’s hard – how bad it hit me, and how bad I let it hit me. I wasn’t strong enough and it took a while. I’m just thankful I was strong enough eventually to come through. I couldn’t have imagined I’d be where I am now 18 months ago.”