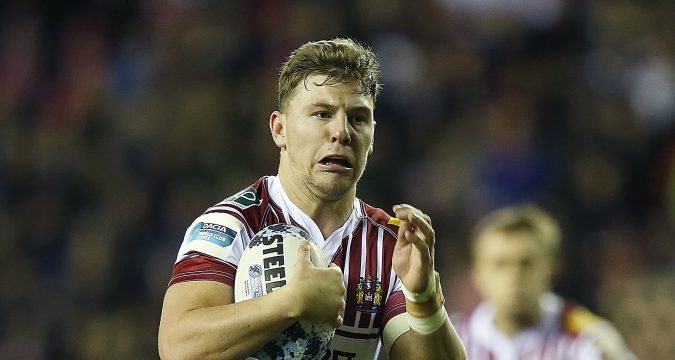 Wigan Warriors stand-off George Williams makes his anticipated return tonight, but he believes he’s not even close to fulfilling his potential.

The 21-year-old has been restricted to just four appearances in 2016 due to injuries, with his last game being almost two months ago. It has been a frustrating time for Williams, who was determined to kick on from last year’s performances that earned him the Young Super League Player of the Year award and two appearances for England in the Test series victory over New Zealand.

But with his back problem now resolved, Williams is keen to not only help his team discover their best form but further develop his game after an impressive start to his career.

“I’m a long way from where I want to be,” he told TotalRL.

“I don’t want to say too much, but I feel like I’ve got a lot of improving to do, you’ve not seen the best of me yet. I’m probably at about 50%. I’m still young and have a lot to learn. Last year went well for me but I’ve got to push on now and get better and better. I have to work on my organising because when Matty’s out I need to step up and do that on the pitch.

“I’m not going to expect too much from myself in the first few games and then get back to where I was at during the end of last year.”

Williams’ lengthy spell on the sidelines has been infuriating for the youngster, particularly given the nature of it.

“Being so young with a back problem isn’t the best, so I’ve had to take my time with it.

“I’ve been out a lot longer than I thought I would be and it’s never nice missing out, but sometimes you have to take a step back to look at things from the outside instead of always being in the mix.

“We’ve not had a good performance yet so to be joint top is pretty good. Hopefully we can get our attack better because our defence has been good.

“But when you have your one, six, nine and 13 out that’s taking away nearly all of your ball players. We’ve had Nick Gregson in at six and he’s not a natural ballplayer, he’s a back-rower and done a great job. We’ve got a lot more to give.”

Williams’ first individual battle on return comes against the cunning Kurt Gidley, who has impressed for Warrington since his move from the NRL. It’s a challenge Williams is relishing.

“He’s a very experienced half and someone I have been watching for years,” he said.

“To be going up against someone like him will be a great challenge for myself. He’s a good organiser and very smart taking his team around the pitch, if I can pick anything up from him then it would certainly be good for my game because I’m a bit more off the cuff.”