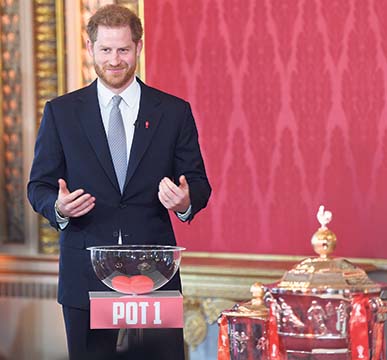 The Rugby Football League is trying to defuse the impact of an article that appeared on the front page of the Sunday Telegraph newspaper at the weekend, which quoted “a source close to senior figures at the RFL”.

Last week it was revealed that Prince Harry, the Duke of Sussex, would no longer be the Royal Patron of the RFL and a number of other organisations for which he undertook a similar role.

Having now moved to the United States and given up his royal duties, royal protocol means that he is unable to represent the Queen in royal roles.

The unnamed source was quoted as saying: “The World Cup is going to take place in the north of England, which is very significant at this time and very important for the royal household to acknowledge and get behind, particularly as it will be happening in many towns where major events are not usually held, such as St Helens, Doncaster and Hull.

“The Duke of Sussex was a high profile figure who embraced the World Cup and we hope the next appointment will be a continuation of that.”

The article then claimed that Rugby League chiefs were hoping Prince William would step into his brother’s shoes to become the face of the World Cup this year, after Prince Harry was stripped of his royal patronages.

“The RFL is hoping Prince William will be given the role of patron as a way of ensuring the sport maintains a high profile at a time when the World Cup is being hosted by the nation (and region) that gave birth to the sport,” it read.

“Prince William is thought to be a good match for the role of RFL patron. He worked with the league’s current chair, Simon Johnson, when Mr Johnson was director of corporate affairs and chief operating officer at the Football Association, where the Duke has held the role of president since 2006.

Mr Johnson has previously praised the Duke’s work, along with the commitment and enthusiasm Prince William brings to all his public roles.

The RFL had earlier said that it would be for the Queen to decide who should take over from Prince Harry as its patron.

“We are honoured that we should have anybody from the royal family as our patron, and look forward to hearing from Her Majesty about who it might be,” said a statement from the RFL.

When contacted by League Express, the RFL did not wish to comment further, explaining that it did not wish to embarrass the Queen by appearing to try to influence her decision.